The "Citizens Within a State" movement is one of a few political groups focusing on economics.  Its leader, economist and former minister Charbel Nahas, warns that Lebanon is heading towards an impending crisis and calls for a process of voluntary correction before it is too late. 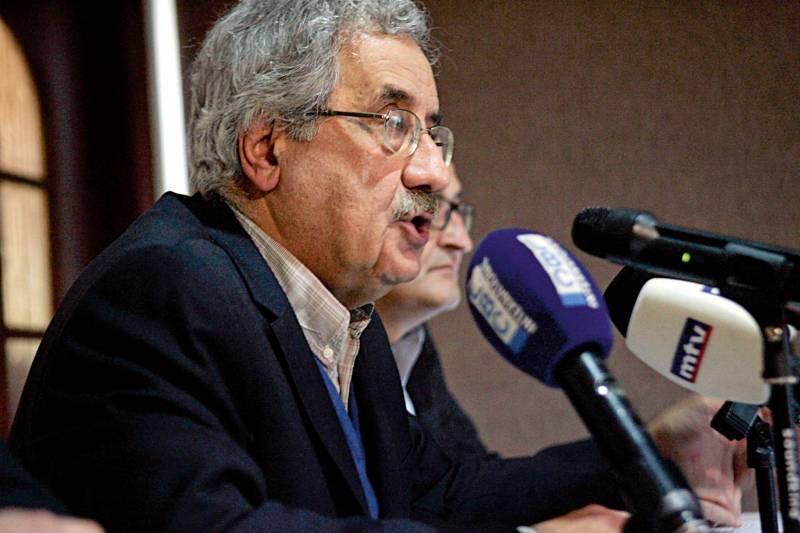 Last October, your movement called on banks, community leaders and foreign states interested in Lebanon to take their responsibilities to avoid an uncontrolled crisis. What prompted this move?

We believe that Lebanon has entered a pre-crisis phase and that the current political system can neither avoid it nor face it. We could have remained silent or simply called on leaders to take responsibility for the whole situation. But we fear that an uncontrolled crisis will have a devastating effect on the country.

A crisis is not the end of the world, but the social and security consequences are not the same if it is managed or not. We are also worried about what the outcome will be. A decline in asset values and a weakening of social structures could create a new wave of speculation and strengthen political clientelism.

Our sense of responsibilities led us to propose a financial, economic and social correction plan based on a fair distribution of risks and losses, and a strong and secular state political project.

You have met with Lebanon’s Central Bank’s governor (Banque du Liban, or BDL), Riad Salameh, the Association of Banks of lebanon and the head of Parliament, Nabih Berri.  How was your initiative perceived?

Our diagnosis is clearly shared by the BDL, banks and a number of external actors. The lack of reaction from most community leaders, however, is quite worrying.

What are the signs of an impending crisis, according to you?

It is necessary to link some signs that have appeared in the past few months. A first one would be the suspension of housing loans subsidized by the BDL. These loans were not part of a housing policy. Their main purpose was to maintain a high level of property value to attract foreign currency and support bank loans backed by these assets.

But since the Lebanese economy is not competitive, -producing almost nothing and importing everything-, the loans in national currency induce a currency outflow. Putting a halt to these loans, despite the solvency risks for the banks, proves the urgency to contain the demand on the dollar.

The capping of bank loans in Lebanese pounds has the same objective. Other negative signals include the decline in eurobonds value, which required the BDL to intervene quickly; the aggressive attitude of banks, who sharply increased their rates to stabilize deposits and extend their maturity; and, finally, the delays in state payments to the National Social Security Fund (NSSF). This lead us to say that we are already in a crisis dynamic.

Following an agreement between the Minister of Finance and the Governor of the BDL, the government recently announced that it will now go into debt at market rates. Is this an additional sign of how serious the situation is?

Until now, it was the BDL that financed the state at a lower rate than the one at which it paid the banks' deposits. The losses suffered meant monetary creation, which in turn fueled demand for dollars. This agreement will, in the short term, allow the Treasury to pay civil servant wages by going directly into debt with banks at higher rates.

This will make the interest burden heavier for the government, but the stock of debt is such that the change in short-term maturities has been considered to be relatively minor compared to the need to curb foreign exchange outflows.

Do these measures save time?

Household and corporate debt now exceeds 100% of the GDP. The public debt, added to the BDL’s net debt, represents about 220% of the GDP.

With an average interest rate of 10%, the service of both private and public debt alone accounts for one third of the GDP.

If we add the levies (taxes and social charges), which represent 20%of the GDP, and the cost induced by the failures of public services such as electricity, water or education, estimated at between 5 and 10%of the GDP, this represents two thirds of residents' incomes.

This burden is unbearable as we can see by the increasing of emigration, layoffs and bankruptcy filings. This is the price to pay to maintain the current situation. Saving time is not a goal in itself. A clear and fair reallocation of losses is necessary.

But we must have the ability to make the diagnosis and the political courage to achieve it. Hiding the losses by worsening them is totally irresponsible. The main issue is the structural deficit of our current account, which represents between 20 and 25% of the GDP. The fact that the country has been able to maintain itself in this situation for so long is a miracle, but not necessarily a positive one since the price to make things better is only heavier today.

Is the crisis inevitable?

The probability of a crisis occurring is extremely high. We can’t predict it mathematically, but the developments we see everyday seem to point in that direction.

Because history tends to repeat itself, people fear a devaluation of the Lebanese pound, but the crisis could actually come in different forms.

Since the last crisis in 1992, things have changed a lot. At the time, the Lebanese government was only indebted in Lebanese pounds, banks were not exposed to sovereign risk in foreign currency.

The size of the liabilities, which can be measured by the weight of the deposits in relation to the domestic income, was much smaller. Households were less indebted, consumer loans were practically non-existent. Today, the crisis could be prompted by an economic slowdown affecting the private sector’s ability to repay its debts, which, by a snowball effect could cause a bank solvency crisis.

Should a devaluation of the Lebanese pound be expected?

If we don’t do anything about it, the crisis can start on one front before affecting others. But if we act now, with political courage, there are many ways to go around it.

The country still has a significant amount of foreign currency reserves – $35 to $40 billion in foreign assets that would allow us to anticipate or at least ride through the crisis. But if they are wasted under the pretext of saving time, as it is the case today, it is the whole society that would become the adjustment variable.

Could an improvement in the political situation in Lebanon or in the region save the day?

In the past, two favorable conjunction of planets, if I can say, allowed the vicious circle we are witnessing today to go on.

The first time was in 2002, right before the invasion of Iraq, when the French, Saudi and Syrian interests coincided and allowed Paris II to take place.

The second phase lasted from 2005 until 2011. The rise in oil prices led to a massive influx of capital that had phenomenal effects on the domestic scene, such as the multiplication by five or six of land and real estate prices as well as the swelling of bank balance sheets.

Does it mean we can bet on a similar phenomenon today? I don’t think so. The Gulf countries themselves are in a delicate financial situation, and Syria is still torn between regional and international powers. On the national level, the six or seven community leaders who hold the power do not trust each other and can’t win the Lebanese people’s trust.

The budget for 2019 should have been adopted before the beginning of the year, as provided for in the constitution.

Don’t you believe in the commitments made at the CEDRE conference?

The main promise made by the government at this conference is to reduce the state deficit by 5%of the GDP over five years. Since global interest rates are rising, domestic interest spreads are increasing, and the State has massively hired in 2018, I don’t know who can reasonably believe that such commitments are credible.

Furthermore, if we add the cost of the investments announced at this conference, it is not by 5% of GDP that we should reduce the deficit, but by 10 or 15%. These investments are necessary, but their implementation will take several years. It is a much more distant horizon than the current situation allows us to focus on. The imminent risks should be taken into account first.

If you were to lead a “government of national salvation" what measure would you first implement?

I would make it clear to the Lebanese people that the sectarian regime of warlords and oil billionaires has come to an end. That we are able to build a secular state that gets its legitimacy not from manipulating citizens' fears or from external support, but from its ability to take into account social reality.

It would first and foremost be a message of hope, without which no sacrifice would be justified or acceptable. People cannot be expected to sacrifice part of their income if they do not fully adhere to the proposed political project. With no political vision attempts at recovery are futile.

Everyone will be tempted to take credit while blaming others or to bet, out of despair, on miracles or chimerical solutions such as the legalization of cannabis or gas exploration.