The formation of the new government has calmed fears about an imminent crash of the Lebanese financial system, but sustainability concerns remain. 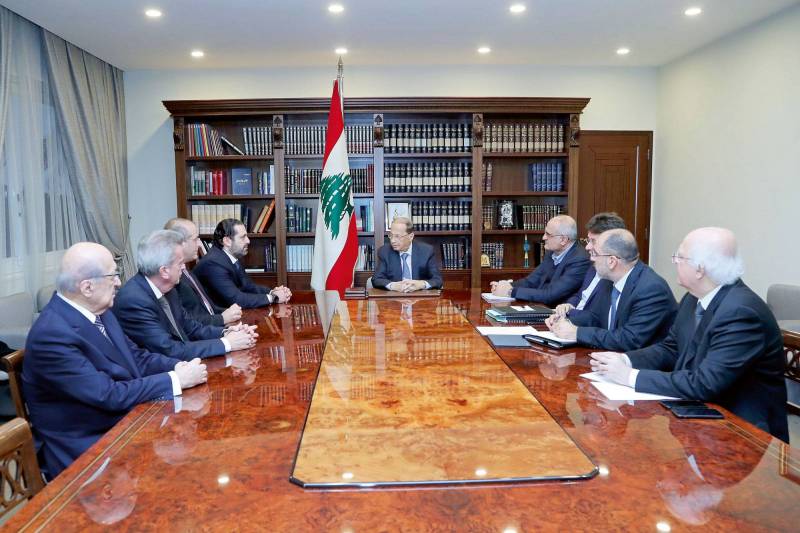 Is there a risk of sovereign default?

The Lebanese government faces two major challenges this year : the rollover of maturing debt (7.3 billion in Lebanese pounds and 2.9 billion in foreign debt), and the financing of the  budget deficit projected to rise to 5.6 billion dollars this year.

Although Lebanon’s gross government financing needs in 2019 are among the highest in the emerging markets and in spite of the downgrading of the country’s long-term investment rating by Moody’s, international investment banks, such as JP Morgan, Goldman Sachs and Morgan Stanley, believe a default is unlikely in the short term.

Given that financial sector deposits at Banque du Liban were 120 billion dollars, equivalent to over 20 times the fiscal deficit, JP Morgan expects the deficit to be financed without recourse to external capital markets . As for the debt, authorities have to pay a total of 15 billion dollars this year, equivalent to 27% of the GDP, in capital and interest. However if we exclude the payments due to the BDL and public entities, debt servicing only represents 7 billion dollars (13% of the GDP).

Local currency debt service is large, but 61% of local currency debt is held by public institutions and the rest by local banks. JP Morgan expects the authorities to pursue debt replacement strategies similar to those of the past, increasing the securities portfolio of BDdL and banks.

As for debt servicing in dollars (2.9 billion dollars in capital and 2.1 billion in interest), it “appears manageable relative to the size of foreign reserves of the BDL, which stood at 33.6 billion dollars end of November” says JP Morgan in a research note published on January 25.

With foreign buffers, a stable investor base and the support of countries like Qatar –that has announced the purchase of 500 million dollars of Eurobonds- a default seems unlikely over a one to three year horizon “unless a broader loss of confidence sparks a banking crisis.” writes JP Morgan.

Why is confidence crucial in the Lebanese model?

The current account can be expressed as the difference between exports and imports of goods and services, or the gap between national savings and investments. In both cases, a deficit means that the country is a net foreign borrower. In order to finance its commitments to the rest of the world, it must attract capital from abroad.

Among the three main inflows sources, the diaspora remittances are the most stable. FDIs depend on economic circumstances, and deposits rely on the confidence of depositors in the financial system, itself depending on capital inflows. Depositors are attracted by high return rates offered by Lebanese banks, but this isn’t enough.

Confidence is paramount and is based on two main factors : the peg between the Lebanese pound and the dollar, and the banks’ solvability. To reassure investors on its capacity to keep the exchange rate stable, the BDL has to maintain high foreign reserves whilst attracting more and more capital inflows. As for the banks’ solvability, it relies on the economic agents’ capacity, including the government, to repay their debts.

Is there a risk of imminent crisis?

The latest figures from November 2018 show a slowing down of capital flows and a decrease in general confidence. The balance of payments showed a cumulated deficit of 4.1 billion dollars, four times that of last year. The annual growth of bank deposits has slowed down to 3.8% , against 4.9% the year before, in spite of a rise in average interest rates. This indicates that banks were incapable of attracting new inflows. Also the dollarization rate of deposits went from 68.51% to 69.89%. In this context, the BDL drew in its foreign reserves which decreased by 5.9% in comparison to November 2017, to 33.5 billion dollars.

Despite the negative signs, the three main US investment banks, Morgan Stanley, Goldman Sachs and JP Morgan believe that the dollar liquidity is sufficient to cover the external financing needs of 2019 (13.2 billion dollars for current deficit and 2.9 billion for the foreign debt maturing this year), dismissing the risk of a major crisis in the upcoming months.

JP Morgan developed three scenarios from the best to the worst case. The best one, considered “too optimistic”, assumes that Lebanon keeps financing its external requirements as it has historically done and that all of non-resident deposits maturing within 3 months are rolled over. In this scenario, the BDL’s foreign reserves would remain at 33.3 billion dollars at the end of 2019.

The worst scenario, considered as “unlikely in the near future”, is a confidence crisis that leads to large capital outflows and a potential run on non-resident deposits. Foreign reserves would drop below the stock of banks' foreign reserve requirements, resulting in acute external financing stress. At the end of the year the BDL would find itself with only 8.6 billion dollars in reserve, and would be unable to maintain the peg or meet the financing needs in 2020. Yet, in this crisis scenario, JP Morgan believes that the authorities would implement temporary macro-prudential measures to limit outflows and preempt a devaluation that would have catastrophic consequences for citizens who consume mostly imported products, and for the government, whose debt is 40% dollar-denominated.

In the third scenario, more likely, Lebanon would witness a decrease of capital inflows of about 4.4 billion, and banks paying back a fourth of the non-residential deposits. The BDL would see its reserves go down by 10 billion dollars in a year, reaching 23.8 billion dollars. This level would also lead to serious doubts about the credibility of the peg or to external financing difficulties in 2020.

Having said that, JP Morgan believe Lebanon will go through a period of lower capital inflows this year, but positive developments such as the government formation or the release of funds announced at the CEDRE conference should maintain a minimum level of capital flows.

How to unlock external support?

To reduce refinancing risks, Lebanon must reduce both its deficits, current and budget. At the CEDRE conference last April, the international community pledged 11 billion dollars in soft loans to upgrade the country’s infrastructure.

This projects could boost capital inflows and global confidence in the short term. In the longer term, these investments would contribute to improving the economy’s competitiveness and reduce the current deficit. But the donors will only release the money if the Lebanese authorities keep their promises of reducing the debt-to-GDP ratio. The ratio is currently at 150%, the third highest in the world, after Japan and Greece.

There are four ways to bring this ratio down : growth, inflation, austerity and debt restructuring. “The options for Lebanon are very limited” said Capital Economics, a British research company, in a note published on January 10th, adding that Lebanon’s economic growth has been low for years and is expected to stay that way in the medium term. As for inflation, it might endanger the exchange rate.

Is a soft landing still possible?

The government committed to reducing its budget deficit by 1% of GDP a year over five years but concrete measures have not been detailed. Some have been vaguely mentioned in the policy statement , such as the fight against tax evasion, the freeze in state hiring, and a progressive hike of electricity tariffs … It is still hard to believe that the government will decrease the deficit by 600 million dollars a year knowing that salaries and debt servicing represent more than two thirds of public spending, and absorb 90% of public revenues.

The ability of the Lebanese government to tighten its belt hasn’t been convincing in 2018. By the end of September (the latest available figures), the public deficit was already at 4.5 billion dollars, a raise of 124% compared to the same period in 2017. It was about to exceed the limit set in 2018’s budget, which was 4.8 billion dollars for the entire period. Public spending was up by 26.5% year-on-year due to the raise of the salary scale in the public sector and the hiring of 5000 people. As for public revenue, in the context of a slow economy, it only rose by 3.2%. The primary balance - without debt servicing- showed a deficit of 590 million dollars, down from a surplus of 1.6 billion dollars a year before.

This questions the ability of the government to slow its deficit in the coming months, especially since the task could be much harder than expected. The increase of real interest rates on local and international markets should increase the debt cost and revive concerns regarding its sustainability unless severe budget tightening is undertaken, said a report by Morgan Stanley.

Goldman Sachs, going down the same road, calculated that with average interest rates around 8% and a GDP growth of 2.1%, the fiscal adjustment needs to be over 8% not 5%. This target “would be exceptionally difficult to achieve, given the very limited flexibility in the Lebanese budget.”, commented the bank.

For Capital Economics as well, “austerity seems too large a challenge (…) there seems to be little appetite among politicians to form a government let alone push through an aggressive (and unpopular) fiscal tightening. The upshot is that a restructuring seems to be the only plausible option.”.

How would debt restructuring look?

Any restructuring of debt is subject to negotiations with creditors and can cause varying degrees of losses depending on the scenario. The issuer can proceed to swaps (exchanging old bonds for new ones that are generally worth less); reduce the interest by lowering coupon values; extend the delay on repayment (debt rescheduling); introduce a grace period where the country is exempted from repaying, or reduce the nominal value of the debt.

This last option, called a haircut, consists of erasing part of the debt. It is the most radical option and the most feared by the markets. According to Capital Economics, Lebanon cannot, like Angola, for example, solve its debt issue by renegotiating bilateral or multilateral loans. Even if these loans were canceled, the debt ratio would go down by only four points. “A restructuring will have to will have to focus on a combination of the government’s local currency debt (i.e. Treasury bills) and the Eurobonds”, stated the research company.

A study by Morgan Stanley showed that in order to put the public debt on a sustainable footing, a 65% haircut should be applied. The bank however acknowledges that “the modalities of any debt restructuring (including any haircut applied) are the process of a negotiation between the state and its creditors, and are thus subject to multiple economic and political objectives (…) In Lebanon, we believe the most important factor that will determine the outcome of any debt restructuring is the relationship between the state and the banking sector, which can be described as symbiotic”.

What are the consequences of a debt restructuring for the banks?

The banks are highly exposed to the sovereign debt. According to Morgan Stanley, banks hold 36 billion dollars of debt, almost double the base capital of the sector. A cancellation of 65% of the debt would make banks insolvent and would provoke a banking crisis. This scenario is judged unlikely given the importance of the sector in financing the country. Morgan Stanley dismisses other drastic measures like a haircut on deposits or capital control, because of their impact on the sector’s reputation. “Any restructuring will be thought as to lower the impact on local banks” writes Morgan Stanley.

It won’t be the first time the country goes through this. In 2002, at the Paris II conference, international donors offered Lebanon, who was on the edge of a crisis, 3.1 billion dollars to help it restructure its debt. The BDL contributed by erasing 1.8 billion dollars debt in Lebanese pounds and the local banks subscribed to 3.6 billion dollars of two-year bonds with a 0% rate. But this have been insufficient to put Lebanon back on its feet.

Why Are Lebanon's Negotiations with the IMF Deadlocked?