Passed last May, the water code compiles all the rules and principles regarding integrated water management in Lebanon in one document. But for Roland Riachi, assistant professor at the American University of Beirut and author of a thesis on the sustainable management of water resources in Lebanon, this text is by no means a panacea, as it does not guarantee a right of access to water to all. 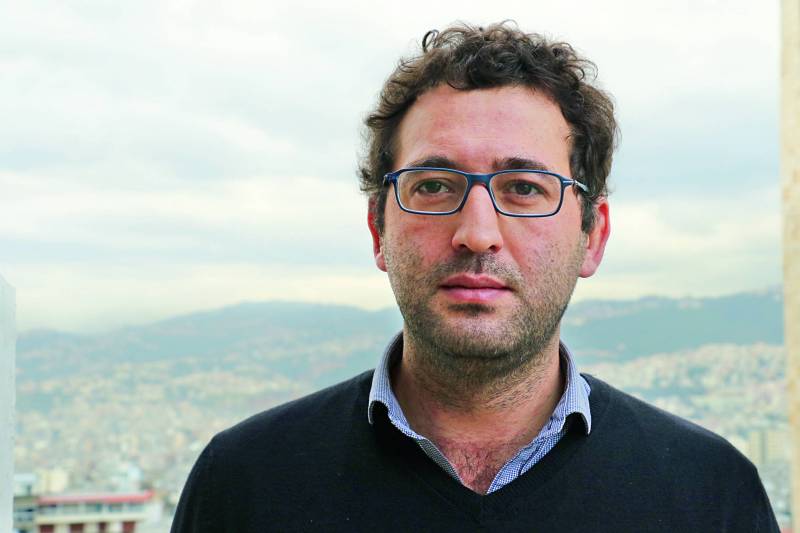 Rolan Riachi (photo : Anne Ilcinkas)
The water code, which has been in the making since 2005, was adopted by the Lebanese Parliament last May. What is it about exactly?

This law was drafted fifteen years ago by a team of French and Lebanese experts as part of a project to implement institutional reforms in Lebanon’s water sector. The text compiles a number of relevant regulations, some dating back to the time of the Ottoman Empire. In other words, current problems involving the sustainable management of water resources and water scarcity are not taken into account. It is an all-purpose patchwork whose authors drafted it in accordance with their interests, without trying to establish universal principles shared by all stakeholders.

Whereas the new law recognizes, for example, the right of the Lebanese to have high quality water and sanitary facilities, this has been coupled with an almost incedible condition: that citizens must pay to obtain it. Nowhere in the world have we seen a basic right conditioned by payment!

Does this law suggest significant advances in the management of the country's water resources?
The water code provides for the establishment of a National Water Council that would serve as an institutional structure reporting to the Prime Minister and would be responsible for developing a national water management strategy. The law also suggests the formation of a "water police" who would be in charge of enforcement. However, it is difficult to take this step seriously when we know that the environmental police created in 2016 (decree 39-89) have, to date, recruited no-one. In short, the law at hand is vague in the extreme.

The law provides for the massive privatization of this natural resource, and allows private interests to prevail over the common good. Water rights will continue to be strictly based on land ownership, with landowners having access to the groundwater covered by their ownership. However, this appropriation, which is based on customary law, can be contested: groundwater should be part of the public domain, especially given the challenges of global warming. Under the new law, owners of wells that are less than 150 meters deep that extractless than 100,000 liters of water per day, no longer require permits. This gives landowners the right to draw a huge amount of water without considering the disastrous consequences of their predation.

How did the Economic Conference for Development Through Reforms (CEDRE) affect the vote of the water code?
Supported by the French Development Agency (AFD), the vote on this law was a prerequisite for donors who are considering financing several projects, particularly large hydraulic projects. A third of the financing package allocated by CEDRE targets the water sector. Examples include the Bisri dam project and the project to divert water from the Litani and Awali rivers to Beirut, which together account for 20% of the planned funding package.

Are these new projects?
Not at all. The Bisri dam was signed off and approved over two years ago. Generally speaking, CEDRE has only addressed old infrastructure projects, which were conceived at a time when the only issue was reconstruction in the aftermath of the 1975 war. Today, donors have rehashed these same projects under a new pretext: aiding refugees. However, this has nothing to do with aiding refugees. If Western governments or international organizations push for the execution of these enormous projects, it is because they intend to impose a neoliberal policy, which consists of transforming a public resource - water - into a commodity.

In their logic, only the private sector and its supposed "good governance" will be able to manage the water sector. Donors here have not expressed any social or ecological concerns. Yet, all over the world, the failure of this market logic is obvious and many communities have renationalized services formerly handed over to the private sector.

You are categorically against the building of dams. Why are they not a suitable solution in Lebanon?
From a geological perspective, almost all of Lebanon lies on a karst formation which mainly consists of permeable limestone rock. As a result, a dam like the one in Chabrouh loses about 200 liters of water per second. The same applies to the dam being built in Janneh (Jbeil): European studies predict a leak of about 50% of the water it is supposed to retain.

This same problem will occur in the Bisri dam, which is built on a seismically active zone. The only solution in this case is the construction of an impermeable cement base which would triple the price of the project and would also require the cementation of an entire valley and more.

But it gets worse: reservoir filling rates around the world are today lower than the rates they were designed for, due to both global warming and depletion of water resources. In Cyprus, for example, dams store only 10% of the water levels for which they were originally built. These uncertainties concerning the availability of water, should give our officials a “reason to pause”, and prompt them to review their strategy. Of course, this didn’t happen, and we continue to build dams based on "old" projects that are disconnected from our current reality and have no viability or future benefit ...

What are the main challenges that the water sector currently faces?
The challenges are many, but the most important is the condition of the supply system which was seriously damaged during the 1975 war, and needs urgent rehabilitation to limit leaks. What is the point of constructing hydraulic dams, when 40 to 50% of the water supply is lost in the distribution network? The cost of upgrading this network is very high: a billion and a half euros that donors do not seem at all interested in providing. Today, in Beirut, 90% of the pipes are over 50 years old, and some are even 100 years old. They contain lead and are covered with asbestos. It is also necessary to improve wastewater treatment and collection, since the majority of wastewater is discharged into rivers, the sea and underground without treatment, polluting drinking water and infiltrating the pipe networks.

The recent Ramlet el-Baïda disaster, where the sewers of several neighborhoods in Beirut spilled onto the beach, was a reminder that Lebanon continues to ignore the treatment of sewage water.

It is true. About 30 treatment plants were built in many regions across the country, but only two are functional, one in Nabatiyeh in the South and the other in the Bekaa, and both are not very effective

How can we adopt a policy of sustainable management of the country's water reserves?
It is crucial to control groundwater systems by calculating their storage, renewal and possible extraction capacities. Lebanon enjoys a large water storage capacity, given its fifty or so phreatic zones, with the exception of the Bekaa, which is dry, and those near the coast, which are contaminated by sea water.