The recently adopted tax on smoking areas is not meant to fight the act of smoking, but it may strengthen the enforcement of the existing anti-smoking law. 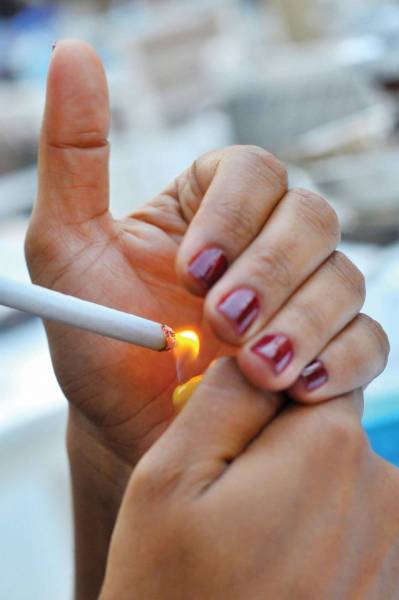 Hotels, restaurants, clubs, bars and cafes must now pay a fee in order to have smoking areas. According to article 58 of the 2019 budget, published in the Official Gazette on July 31, these venues are now required to pay a fee if they wish to operate a smoking area.

The text does not undercut or contradict Act 174 of 2011, which prohibits smoking cigarettes and water pipes in closed public spaces - that is, a space with a ceiling and at least three walls - but rather it requires restaurant owners to pay for a smoking permit to allow users to smoke in "open" areas or on terraces.

To obtain the permit, restaurateurs must pay an annual fee, the amount of which depends on the category (from one to five stars) under which they are registered with the Ministry of Tourism. The price ranges between 500,000 Lebanese Lira ($ 330) for a café that serves only drinks and five million Lebanese lira ($ 3,300) for a five-star establishment. This cost is added to a variable amount that depends on the size of the establishment, starting at 300 Lebanese lira per square meter (0.20 dollars) for a cafe, and reaching 3000 Lebanese lira per square meter (2 dollars) for a five-star hotel. Any establishment that fails to meet the new requirement will be downgraded to 3 stars.

For the government which has committed to reducing its public deficit to 7.5% of GDP this year, it is a question of finding a new source of income. "This new tax is not intended to fight smoking," says the founder of hospitality consulting company, Hodema, and a collaborator with Le Commerce Du Levant, Nagi Morkos.

The 2019 budget did not provide for any increase in the price of cigarettes, which is considered the most effective way to reduce smoking. "A rise in prices could have generated significant financial revenues for the Treasury. Instead, the state continues to sacrifice public health and the rights of non-smokers," said lawyer and former Minister of the Interior, Ziyad Baroud.

Unsurprisingly, restaurateurs opposed what Aline Kamakian, owner of Lebanese-Armenian restaurants Mayrig and Batchig, described as a "useless tax". "Our accounts are weighed down by several recent measures, such as the increase in VAT and employer contributions to the National Social Security Fund. Not to mention new taxes imposed on foreign workers that will also increase our costs," Kamakian lamented.

Towards a stricter application of the anti-smoking law?

This new tax could, however, lead to stricter enforcement of the anti-smoking law (174 of 2011), which has been largely ignored by the hotel and restaurant sector, due to the lack of enforcement. "The Ministry of Tourism, which is supposed to carry out the checks, does nothing, arguing alleged negative effects on foreign customers, especially tourists from Arab countries, hookah lovers," said Rania Baroud, coordinator of the National campaign for the application of law 174.

But with the introduction of the "smoking permit", it will be up to the Ministry of Finance to verify not only that the tax has been paid, but also the compliance of institutions with Law 174 of 2011, since respecting said law is a perquisite to obtaining and maintaining a smoking permit.

Restaurants have strong motivations to comply, since in the event of infringement, the offending establishments will have to pay both the tax and a fine of the same value.

However, restaurateurs have not had their final say on the matter; their union is currently working with the Ministry of Tourism to develop a less stringent version of 2011’s Law 174. "Some restaurants, including Lebanese restaurants, do not have terraces or open spaces dedicated to water pipes and cigarettes. In these restaurants, prohibiting indoor smoking, as the Law of 2011 dictates, would cost them 50% of their turnover," says Aline Kamakian.