Corruption is one of the main bones of contention between the political class in Lebanon and the protestors. Despite several promises to address the issue, any attempts to confront it are hindered by a weak legislative system and the absence of political will. 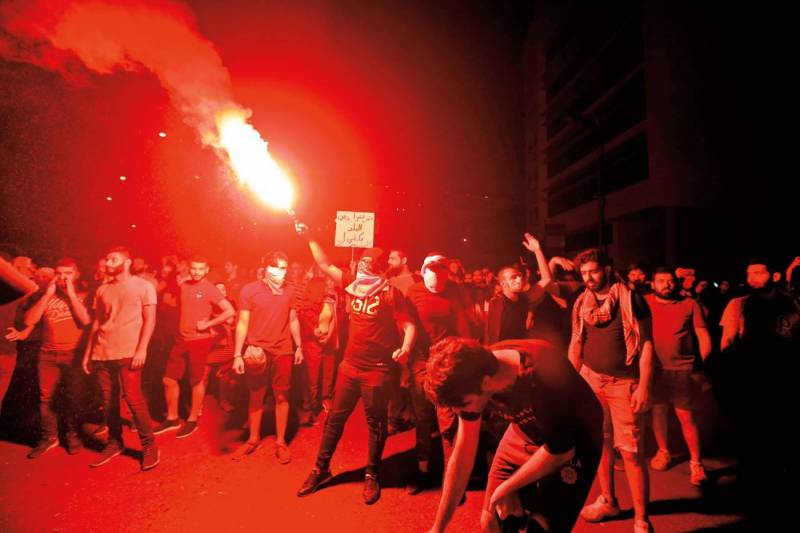 "Thieves!", "Give us back the stolen money!"... Corruption is one of the main accusations leveled against the government and the political class by the protestors who first took to the streets on October 17. In fact, Lebanon is ranked among the worst countries in the world in terms of corruption. In 2018, it ranked 138th out of 180 countries, according to the Corruption Perceptions Index (CPI), reported by the NGO Transparency International, the country scored 28 out of 100, a stagnant result for the past four years. "We cannot do worse," one expert who preferred to stay anonymous commented ironically.

Based on previously revealed figures, the former Minister of State for Administrative Reform (OMSAR), Dr. Inaya Ezzeddine, has estimated the cost to the Lebanese state at more than 5 billion dollars per year, i.e. about 9% of the GDP in 2018. The endemic corruption is mainly caused by the weakness of the existing legislative framework. "Each text contains a trap, as if it had been written not to work," says Rabih el-Chaer, former president of the NGO Sakker el-Dekkeneh.

The law on illicit enrichment

The oldest and most emblematic law is that regarding illicit enrichment, which was adopted as early as 1954 and amended in 1999. It has since then never been used.

The law requires all civil servants, judges, municipality consultants, ministers and members of parliament to disclose their assets and those of their families when they first take office and also when they step down. The asset disclosures are submitted in sealed envelopes to around fifteen institutions, among which are the Constitutional Council, the Supreme Judicial Council and a few ministries. The disclosures are then stored at the Central Bank.

In reality, none of these envelopes was ever checked. In fact, opening them requires in the first place a complaint filed by a citizen before the public prosecutor or the investigative judge in Beirut. The complainant should be able to provide a bank guarantee of 25 million Lebanese pounds (approximately 17,000 USD). Should the investigation reveal that the plaintiff is acting dishonestly, he shall be liable to a fine of 200 million Lebanese pounds (approximately 132,000 USD), in addition to imprisonment of three months to one year. These measures would discourage even the most daring citizen…

Moreover, "the law defines illicit enrichment as assets gained by a civil servant through illegal and illegitimate transactions. The plaintiff shall therefore submit evidence that the civil servant in question has committed these violations, which is very difficult," says lawyer Ghassan Moukheiber, coordinator of the Lebanese Parliamentarians against Corruption (LebPAC) organization, and founder of the Lebanese Transparency Association (LTA). Consequently, no conviction was never obtained using this procedure.

The complaint filed by Mount Lebanon Attorney General Judge Ghada Aoun to the investigative judge in Beirut, concerning the former Prime Minister Nagib Mikati, several members of his family and Audi Bank, thus constitutes a very rare move. Until this moment, no follow-up on this complaint was done.

The law on the right of access to information

Another more recent example of the weakness of existing laws is the law on the right of access to information, the purpose of which is to promote the access of all Lebanese people to the national public archives, in order to increase the transparency of the state and facilitate the citizens' participation in the public decision-making process. The law was adopted in January 2017, after a decade of negotiations. However, it has still not been implemented by the majority of public administrations, nearly three years after its passing.

The authorities have found a means by which to avoid applying the law: they pretend that decrees are necessary before it can be implemented. "These decrees are certainly necessary, but not essential to proceed," says Ghassan Moukheiber. However, this was the argument mentioned in June 2019, by the Secretary General of the Council of Ministers, Judge Mahmoud Makkiyeh, to reject a claim submitted in April by the Kulluna Irada association, and The Legal Agenda.

The law on whistleblower protection

Additionally, a law on whistleblower protection was adopted in 2018. It is also still pending. In theory, this law guarantees the anonymity of a whistleblower and the confidentiality of the information they provide. In practice, however, and in order to be efficient, it requires the existence of an entity capable of collecting any such report, protecting the whistleblowers and, in certain cases, granting them financial rewards. "This is a clear example of the need for building institutions," points out Ghassan Moukheiber.

One of the priorities for strengthening the existing framework is the adoption of a national anti-corruption strategy. A strategy developed by OMSAR, in collaboration with the United Nations Development Program (UNDP), was submitted to the Council of Ministers for the first time in May 2018. Following requests for amendments, a second modified version of the text was sent back for consideration a month ago. "That's where we have to start; as it will allow different laws and institutions to better complement each other, in order to ensure that all forms of corruption are covered," says Rizk Zgheib, a lawyer and lecturer at the Faculty of Law and Political Science at St. Joseph University.

Another key measure would be the adoption of the law regarding the creation of a National Anti-Corruption Agency. "This commission is the cornerstone of the fight against corruption. Its role will be to receive complaints, filter them and follow them up with the judiciary in the name of the citizens. It will also act as an observer of the levels of corruption in the country, through publishing reports based on the collected information," explains Ghassan Moukheiber. It would also be the missing link needed for the implementation of several laws such as the whistleblower protection law, which requires the supervision of a public institution.

First adopted in June by the Parliament, the law was sent back by the President of the Republic Michel Aoun in July, using his prerogatives, so that several points could be debated again, including the process of how the members of this independent commission were to be appointed. As a result, the law must be voted for again, with or without modifications. "Should the Parliament function optimally, this vote could take place in less than a month," says Ghassan Moukheiber.

A new law on illicit enrichment

To fight corruption effectively, illicit enrichment must be redefined. "A draft law has been waiting to be examined for two years in the Parliament," says the lawyer regretfully, noting that the adoption of this law would be a major step forward.

The draft law encompasses a procedure for the recovery of funds diverted abroad; allowing the state to freeze and seize funds received by officials or civil servants, or to repatriate them. As such, the current debate over the adoption of a specific law dedicated solely to the recovery of stolen funds leaves the experts skeptical. "It's more of a populist measure; the tools are already available, we just need to reform the law on illicit enrichment, which naturally includes this mechanism that concerns those accused of embezzlement," notes Ghassan Moukheiber.

For him, the short-term goal must be to strengthen the existing framework, and to then complete the existing measures later on. "The challenge lies in the implementation of these laws. It needs real political will; it might reside in the popular pressure that the street is currently bringing," concludes Ghassan Moukheiber.