The Lebanese have been taking to the streets since October 17, but the same battle is also being fought over the Internet. Unsurprisingly, this tool of information dissemination is also a place of propaganda and disinformation. 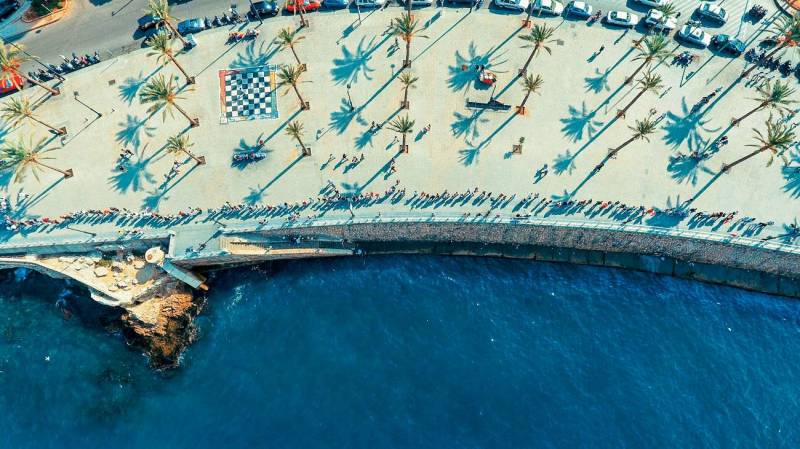 The human chain, that has taken place on October 28, was launched from the online platform lebtivity.com AFP

Since October 17, the battle between the authorities and demonstrators has been fought almost as intensely on the Web as on the streets. The protest movement has deployed digital tools on a wide scale to organize, collaborate and promote its activism. But the Internet is also being used to spread propaganda, as evidenced by the mass distribution of "fake news".

"We saw very strong online engagement from the beginning of the movement," says Roula Mikhaël, director of Maharat, an organization that defends press freedom. “It is a generational effect: many of the protesters are young and very connected on social networks.”

According to Ayman Mhanna, director of the Samir Kassir Eyes Center for Media Freedom, social platforms have played an important role in "coordinating, organizing and disseminating information”, Mhanna added that WhatsApp groups in particular have facilitated coordination and mass mobilization.

"During the protests of 2005, communication between activists, mostly by text, was more complicated and more expensive. Today, images and videos are broadcast in real time, which helps build group awareness. From south to north, the demonstrators have quickly realized that they are not alone in criticizing the political elite and share the same slogans and the same demands," says Stéphane Bazan, a digital strategy advisor. 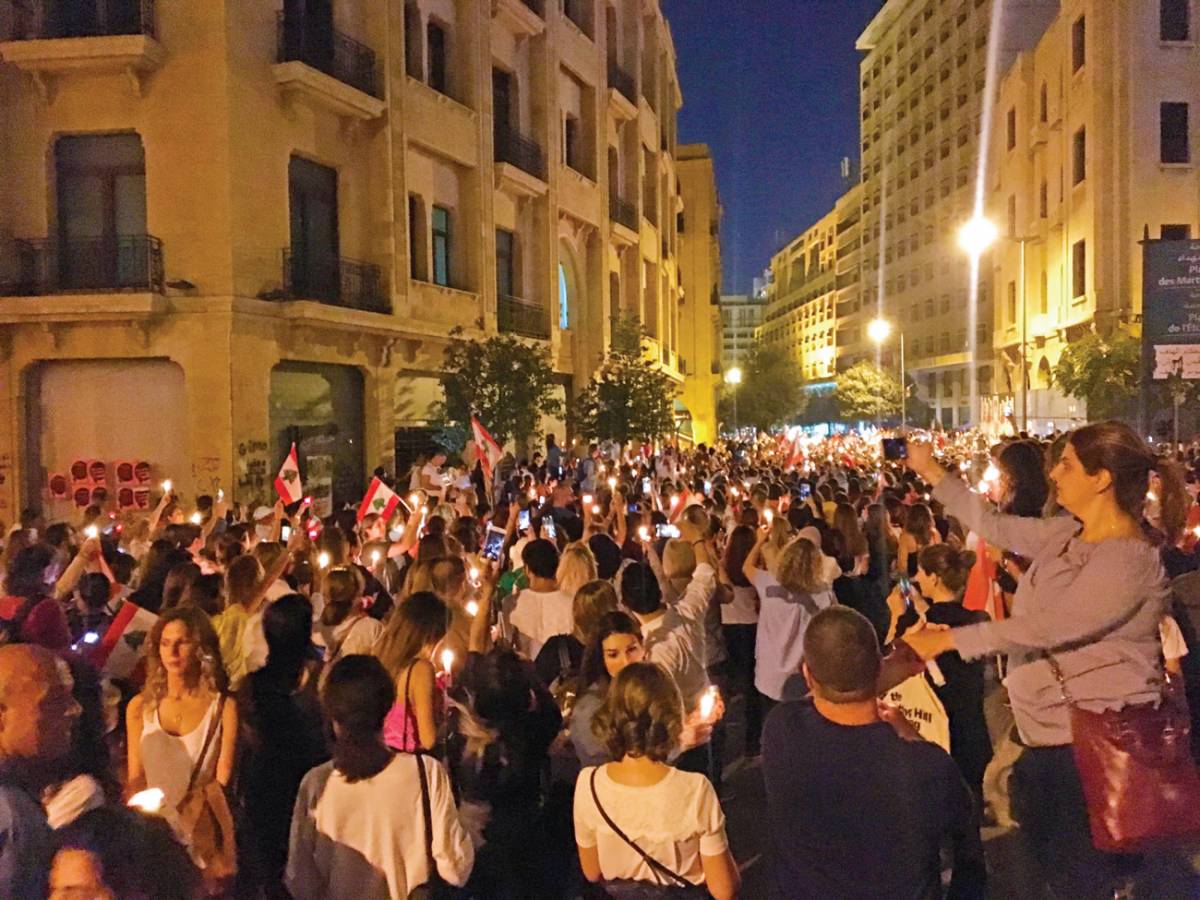 Organizing the movement became more efficient with the creation of sites such "Daleel al-Thawra". Launched in the early days of the protests by a group of friends, including entrepreneur Ayah Bdeir, this site listing mobilization-related activities has become a reference for protesters. Other initiatives, such as lebanonrevolts.weebly.com, which allows viewers to watch live streams of the revolution, and lebanonprotests.com, which offers open source access to movement-related tweets, have facilitated the dissemination of information. Alongside all this are established online platforms, such as the Lebtivity.com online calendar, which lists events related to the protests.

The movement has also relied on youth oriented media, much of which is perfectly adapted to digital journalism, such as "Megaphone", an independent media outlet that has existed on Instagram and Facebook since 2018. "Our content is specially adapted for social networks, be it the way videos are conceived, the synthetic presentation of information or design work. This is work that the traditional politically partisan media cannot do," says Jean Kassir, editor of Megaphone.

This modern approach to handling information appeals to a young audience: after the first week of protests, Megaphone’s Facebook page had recorded a million video views, without the outlet having to sponsor its content.

Digital tools have thus enabled the "October Revolution" to create a coherent and positive self-image, and to organize events with strong symbolism. From the thousands of candles that illuminated Downtown Beirut during the “Women’s March” on November 6 launched by Sarah Beydoun on Instagram, the co-founder of the brand Sarah's Bag, to the human chain of October 28 that connected the north to the south of the country, the movement has produced "excellent content, very well thought out in terms of virality, which has also been highlighted by the international media," points out Stephane Bazan.

As a reaction, the counter-revolution has also organized itself on the Web, but "it took longer to set up since the ruling parties are used to more traditional modes of communication," explains Roula Mikhaël. Digital tools have mainly been used to "discredit the movement, [to] show that it has been taken over by foreign powers and [to] instill fear," says Jean Kassir.

This is especially the case since "the culture of propaganda is very ingrained in some Lebanese parties," confirms Stephane Bazan. According to Media Ownership Monitor (MOM), an initiative launched by Reporters Without Borders and Samir Kassir Eyes, which has studied 37 media outlets, almost 80% of the mainstream media have a more or less direct political affiliation. This situation has contributed to the discrediting of the traditional media and provided fertile ground for disinformation, as evidenced by the massive dissemination of “fake news”, especially through WhatsApp.

Twitter is also a battleground for this war of influence. Ayman Mhanna gave the example of the proliferation of misspelled hashtags, which evidence suggests come from computer bots. "People click on them quickly and this reduces the trending of real hashtags in support of the movement," he said.

One party that stands out for having a particularly efficient use of these digital tools is Hezbollah. Ayman Mhanna cites as an example the mass distribution of hashtags in favor of its secretary general during his speech on October 25: "We realized after analysis that almost 80% of the accounts that disseminated these hashtags had in fact been created on the same day”, proof that there is software behind the campaign.

Sources also claim that hackers launched a massive campaign to collect user data in early November, who are said to be affiliated with a certain ruling party. SMEX, an NGO that defends human rights online, says it does not know who is behind this campaign reported on November 8, but confirms that malicious links in the guise of promotional offers, sought to "harvest user data to possibly target them with advertising, or worse, access accounts and applications linked to their phone numbers," said Azza el-Masri, campaign manager at SMEX.

Was this data used and if so, for what purpose? There has been no clear answer at this point, but scandals like that of Cambridge Analytica in 2018, a private company that exploited user data on Facebook in order to distribute targeted messages in favor of Donald Trump and Brexit, showed the extent to which it might be possible to influence citizens.

In Lebanon, these fears are all the more legitimate as there is “no personal data protection law in place, nor an active telecommunications regulatory authority that would protect users”, according to SMEX director, Mohammad Najem. In fact, "it is easy to have access to a great deal of data if you pay enough money," confirms Stéphane Bazan.

"For example, some sites require you to enter your email address and some personal information in order to continue browsing their page. The owner of this site can then sell its customers’ file with the contact details provided by Internet users, divided by interest, gender, and location ... It is then possible to target the audience according to these features by uploading the file on Facebook or Instagram” says Myriam El-Khoury, digital marketing consultant.

Some apps and games also ask users to allow them access and can store information about their Facebook accounts, such as likes, age, friend list, and email address. “All the information that can be stored can technically be sold," she explains.

In Europe, a data protection law was passed in 2018, making it compulsory to obtain the consent of Internet users before using their data in a marketing campaign; the law also regulates the methods and the duration of data storage. "In Lebanon, in the absence of a legal framework, there is vagueness concerning the use of our personal data", continues El-Khoury.

"We have seen business and political figures promoting their pages on social media with sponsored content when we talked about the formation of a government of specialists. It would not be surprising if they used this type of technique to improve the performance and visibility of their campaigns, "adds Stéphane Bazan.

Beyond manipulating public opinion, digital data could also be used for surveillance or even repression.

Using encrypted applications like WhatsApp makes it more difficult to access data, however, "Internet service providers like Ogero, IDM, Alfa or MTC have access to metadata," said Mohammad Najem. This means that if the content of a message is difficult to access, any information around the message, such as the IP address, the recipient, the date on which it was sent and received, is easily retrievable. "We cannot trust any entity that handles our data", continues the director of SMEX, "nobody knows what is really being done, it is a very vague and very sensitive subject", confirms Stephane Bazan.