Long overshadowed by community divisions, socio-economic grievances are at the heart of Lebanon’s protest movement that has been ongoing since October 17. But these grievances aren’t being supported by traditional unions, which have traditionally played an important role in the history of social conflicts in Lebanon, before being co-opted and neutralized by the authorities. 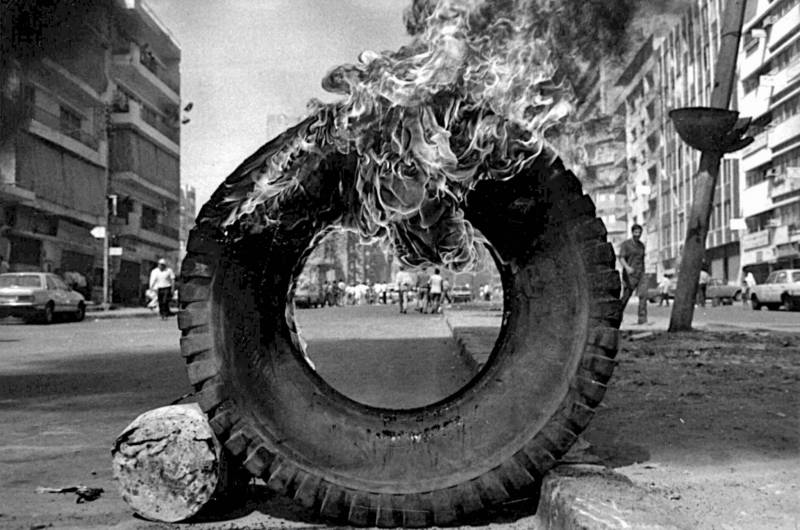 Burning tires: a method of protest that was commonplace in previous movements. Seen here, on the Ouzai road in August 1987 OLJ Archives

Social security, jobs, wealth redistribution… Since October 17, the Lebanese have been demanding socio-economic rights on which they had long given up, but their grievances aren’t made by the organizations that one might expect. The history of social conflicts shows that this has not always been the case: Before the Civil War, Lebanon has seen numerous mobilizations around various socio-economic grievances that were led by strong union movements, these are notably absent today.

From its inception – Lebanon‘s first union formed in 1914 – up until the immediate post-war period, the union movement was characterized by its strong capacity for mobilization, which enabled it to achieve significant progress, notably through the General Confederation of Lebanese Workers (GCLW) established in 1958.

The importance of the industrial sector, which almost ceases to exist in post-war Lebanon, was one driver of historic mobilizations. “There were dense industrial areas, which extended to both Christian and Muslim regions,” says Ahmad Dirani, who heads the Lebanese Observatory for the Rights of Workers. The transversality of the labor’s condition allowed the formulation of horizontal grievances, such as the need for a minimum wage, family allowances or paid leaves.

Indeed, the largest strike at the time took place in 1972 at the Gandour Factory, makers of the popular brand of biscuits, and one of the largest factories in the country. The strike, which left two participants dead after some violent incidents, was led by some 1,200 workers, demanding, inter alia, the application of a state-imposed wage increase.

The workers’ movement thus led to several advances in social and economic rights. “It was popular pressure in the 1970s that allowed [for the] laying [of] the foundations of the National Social Security Fund (NSSF), whose decree had been promulgated in 1963 under President Fouad Chéhab (1958-1964),” adds Ahmad Dirani.

Another notable achievement was the 1975 reform of Article 50 of the Labor Code, “which allowed employers to lay off workers for no reason and with very brief notice. Its new version provides better protection for workers, for example by introducing the concept of unfair dismissal. This achievement reflects the ability of pre-war unions to bring about socio-economic changes,” said Sari Madi, lecturer at the University of Montreal.

During the Civil War, the union movement remained active. “Its main grievances were about ending the confessional conflict and socio-economic issues, such as defending the [Lebanese] pound,” explains Bassel Salloukh, professor at the LAU. The GCLW managed to organize several mobilizations in the 1980s and negotiated with the authorities for an increase in wages. In 1987, the organization launched a five-day general strike throughout the country, marked by a strong symbolic gathering in front of the National museum, staged by several hundred thousand Lebanese from both western and eastern neighborhoods regardless of the confessional divide.

But the importance of collective action can also be seen through the influence of left-wing parties as part of the geopolitical context marked by the Cold War. “The predominance of the Lebanese Communist Party in the General Confederation of Lebanese Workers (GCLW), and other leftist parties –such as the Organization of Communist Action, whose priority was typically workers and work conditions, to a certain extent explains the activity of Confederation and its large-scale mobilization,” explains Léa Bou Khater in an article published in Confluences Méditerranée.

These left-wing unions then opposed many right-wing unions, which represented the interests of the ruling class. “Many unions were funded to restrain communist unions. Far from a real class conflict and a break in traditional relations [that aimed at] enabling class consciousness to emerge, these mobilizations sometimes served as intermediaries among opposing geopolitical interests,” the researcher says.

If the union movement was part of a political divide between the left and the right, this dynamic disappeared completely after the Civil War.

Post-War and the Neutralization of Collective Action

The immediate post-war period has been marked by several union mobilizations. In 1992, the GCLW led the “tire revolution,” a popular uprising in response to the Lebanese Pound’s devaluation, an event that brought down Omar Karamé’s cabinet.

But very quickly, as neoliberal reconstruction policies increased disparities between various segments of society, social protests became extremely rare. At stake was the confessional system established by the Taëf Agreement. “It is a strong system that relies on clientelist institutions, used by the confessional elite to retain their respective communities. It is also based on a strong ideology, which makes community ties the essential source of Lebanese identity,” said Bassel Salloukh.

It is a system that neutralizes any possibility of collective action in the name of transversal causes. “Social insecurity is then regarded as self-evident, and social problems are no longer labeled collectively but are now expressed in community terms”, explains Myriam Catusse, research officer at the French National Center for Scientific Research, the Institute for Research and Studies on the Arab and Muslim Worlds (Aix-Marseille).

As a result, in the 1990s, rather than focusing on social and economic causes, collective action was organized primarily in the name of civil and political rights. It was carried out by “advocacy associations,” which were studied by researcher Karam Karam in Le movement civil au Liban and which focused their claims around themes such as human rights, equality between men and women and the environment.

The strength of the post-war confessional system showed through its neutralization of union organizations, a process which stripped employees of any effective means of organizing and disseminating socio-economic grievances.

The use of sabotage was not new, but it became systematic in the post-Civil War period. This process relied on intimidation, orchestrated with the support of the Syrian regime. “In the early 1990s, a meeting was held in Damascus, bringing together all Lebanese union representatives. Their message was clear: No opposition from the workers’ movement will be tolerated,” recalls Ghassan Slaiby, who was close to union circles at the time. In order to neutralize all dissenting forces, the government took the emblematic decision in 1993 to ban public demonstrations. 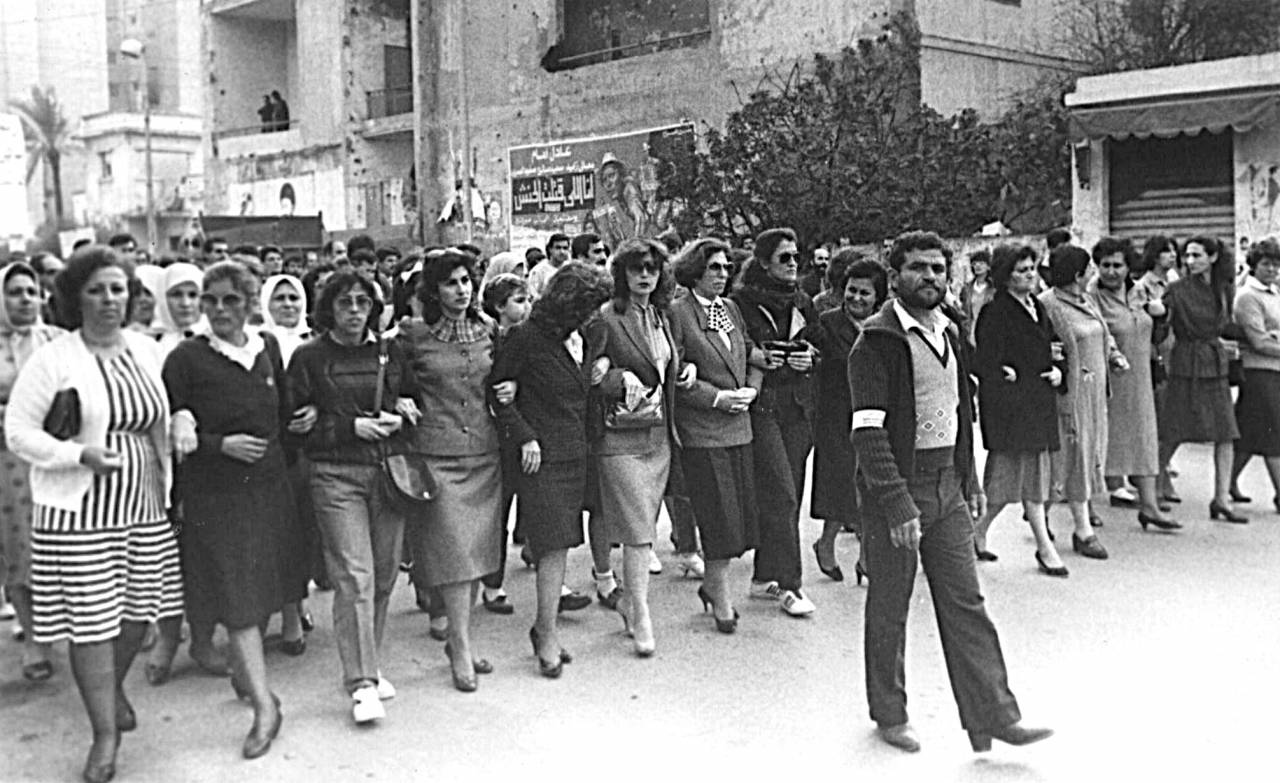 March 1985: Demonstrations against the high cost of living. Women were at the forefront. OLJ Archives

Another technique used by the authorities was the infiltration of unions. In Lebanon, it is possible to create a multitude of unions for a single profession, provided that the Labor Ministry authorizes the move – a form of control over the union movement by the state that is contrary to the rules of the International Labor Organization. Each union is then entitled to two delegates on the GCLW’s executive board, regardless of the number of union members.

“The confessional elite created a multitude of fake unions, which were empty shells with no real adherents. Confessional leaders were then awarded control of key positions in order for them to take control of the executive board from the inside,” explains Nizar Hariri, a professor at Saint Joseph University.

This technique proved to be effective. In 1997, Elias Abu Rizq, considered close to Émile Lahoud and therefore opposed to Rafic Hariri’s neoliberal policies, was removed from the GCLW presidency, during “sort of a coup organized by the government to set up their candidate, Ghanim al-Zughbi, who was close to Amal Movement,” explains Léa Bou Khater.

“If it was still active in the early 1990s, the union movement lost its independence completely after 1997 and became an instrument in the hands of the confessional elite,” concludes Bassel Salloukh. This process of co-opting explains why the GCLW is not representative of the Lebanese workforce. According to Ghassan Slaiby, “54% of union organizations are confessional and 84% were created after the war.”

After 2005, the Syrians’ departure could have left more space for social protests. However, the division between the March 8 and March 14 coalitions monopolized collective action and the partisan nature of grievances was most often at the expense of transversal socio-economic grievances.

Starting in the 2010s, in the context of declining capital flows, which allowed for the “stifling [of] the urgency of economic and social change,” according to Léa Bou Khater, and the drying up of the clientelist machine, socio-economic grievances have made a limited comeback.

So in 2012, for example, employees of Spinneys, a popular chain of supermarkets, launched a strike movement to demand the application of a new pay scale. At almost the same time, day laborers at Électricité du Liban (EDL), threatened by layoff, went on strike for almost 100 consecutive days. In 2014, they occupied EDL’s headquarters for four months. But the most important mobilization was that of the Union Coordination Committee (UCC), which was established in 2012 outside of the GCLW and which brought together more than 200,000 public servants and teachers from the public and private sectors in favor of higher wages and a new pay scale. 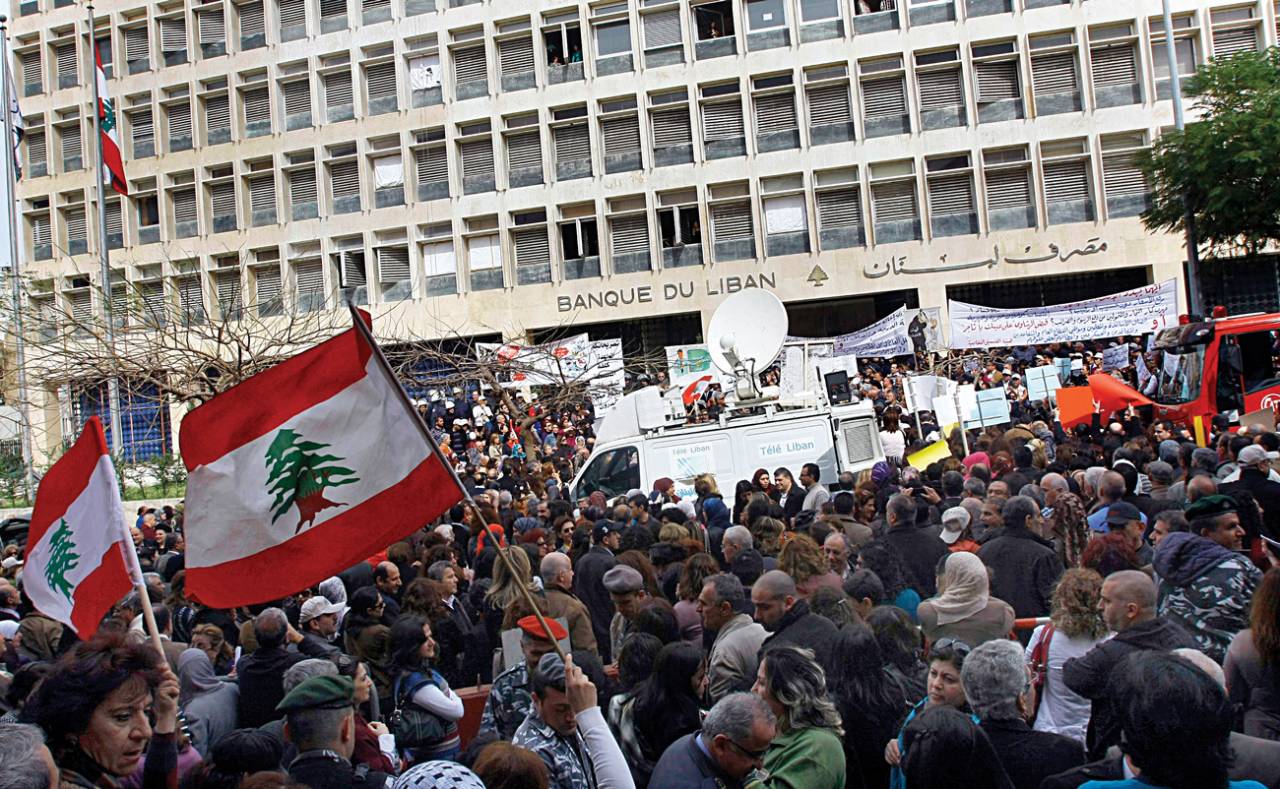 The mobilization of public servants and teachers was, before October 17, one of the most important mobilizations of the decade. Here, in front of the Bank of Lebanon in 2013, they called a strike to protest for a new pay scale. Sami Ayad

“These social conflicts, organized outside traditional union frameworks, remained cyclical and sector-based. However, they were indicative of the tensions arising within the clientelist and sectarian power relationship regulating these workspaces,” explains Michèle Scala, a researcher associated with the French Institute of the Middle East and a PhD student at the Institute for Research and Studies on the Arab and Muslim Worlds.

Since October 17, 2019, in the wake of the Arab Spring, we have been witnessing “the emergence of a new type of social challenge, without a leader or organization,” as Lea Bou Khater points out.

For Professor Bassel Salloukh, “the movement’s success will depend in part on its ability to create its own organizations. The examples of Tunisia and Sudan have shown the importance of unions in the transition from authoritarianism to democracy.”

There are two possibilities for the movement. “Creating new unions and independent associations, or constituting an opposition within existing organizations,” says Ghassan Slaiby. “It isn’t about having leaders but about organizing themselves in a network. That is what the uprising has missed so far. The challenge on the street can be tarnished, but the uprising, as a social movement, will need to created representative mechanisms in order to translate its demands at the institutional level.”

This process appears to be in place, as the workers’ organization recently showed in a Lebanon's Professionals' Association (see box). The election of Melhem Khalaf, an independent candidate and elected head of the Beirut Bar Association, in an arena traditionally dominated by sectarian parties, also testifies to disruption within existing institutions.