As the Lebanese pound has lost more than 60% of its value on the parallel market, consumer prices are soaring. Pending hypothetical international aid, the government has only temporary levers to try to limit the damage. 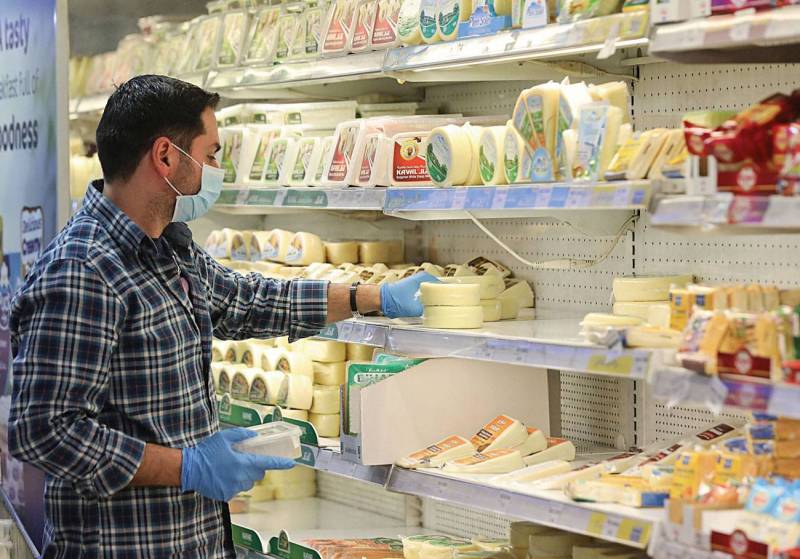 “Prices are going up week by week. Baby wipes, which were sold for LL8,500 in October, are now worth LL18,500. Cereals rose from LL10,750 in March to LL17,000. Even the labneh baladieh has increased by LL550 in three weeks! Shopping has become a real ordeal,” sighs a supermarket customer as she pushes her shopping cart. This housewife is luckier than most: she is part of the privileged few whose nominal salary hasn't been cut in half. However like all Lebanese, her purchasing power is in freefall.

Faced by unstable prices, the authorities are in no hurry to measure the phenomenon. On the website of the Central Administration of Statistics (CAS), the latest consumer price index, based on a typical basket of goods and services, dates back to February, when it was up 11.4% from the same month of last year.

For its part, the Consultation and Research Institute (CRI), an independent organization that has been publishing its own index since 1977, sees prices in Beirut and its suburbs rising by 18% in April, at an annual rate. “Prices have been going up since December,” said CRI director Kamal Hamdan. “But the increase in the price index is still relatively contained, as some expenses, such as housing, electricity or taxes billed in Lebanese pounds, have remained stable, while strategic imports, namely fuel, wheat and medicines, are subsidized by the Banque du Liban (BDL). However, some categories are showing a very marked increase.”

This is the case for foodstuffs which, with a 30% increase since April 2019, are the main inflation driver. The reason is Lebanon’s dependence on imports. According to a report by the UN Economic and Social Commission for Western Asia (ESCWA) on food security (2016), the country imports between 65 and 80% of its foodstuff needs.

However, the costs of imports have increased considerably due to the dollar’s rise on the parallel market, the only source of foreign currency for importers at the time being. In the shadow of the de facto capital controls imposed by the banks, “this is the only way for us to get dollars that are labeled as ‘fresh money’ and can be transferred to our suppliers abroad,” said a foodstuff importer, speaking on condition of anonymity. While the Lebanese pound has lost more than 60% of its value at moneychangers’ shops, “this depreciation is not fully reflected in prices, as some costs, such as tariffs, are in Lebanese pounds and therefore stable,” he added.

The phenomenon also affects local products, albeit to a lesser extent. Supplies for the Lebanese industry are also dependent on imports, whether for packaging, inputs or certain maintenance tools.

“Import-dependent costs have skyrocketed: The price of plastic cans has quadrupled, while milk prices have doubled with the increase in cow feed costs, which have tripled. To this, one must add the import of spare parts: This has forced us to increase the price of labneh by 20%,” said Elia Ghorra, head of the “Domaine de Taanayel”.

While Covid-19 has exacerbated this inflationary surge, due to global supply difficulties and quotas imposed by some exporting countries to prioritize their domestic markets, “in Lebanon, the pound’s depreciation is the main factor causing inflation,” said Hani Bohsali, president of the Syndicate of Importers of Foodstuffs in Lebanon.

At this level, however, the government’s room for maneuver is very limited. In the absence of liquidity injections and sufficient foreign currency reserves, neither the BDL imposed exchange rate cap nor the arrests of money changers who traded above the cap will raise the pound. “The solution to this problem depends on the outcome of the government’s negotiations with the International Monetary Fund (IMF)” over a rescue loan, Economy and Trade Minister Raoul Nehmé said. “But in the meantime, we are doing what we can, with the dollar reserves available under BDL management.”

To limit the price of basic necessities, the central bank decided to for one year finance certain imports at an intermediate rate. Through Circular 557, sugar, rice and cereals are expected to be imported at a rate of LL3,200 per dollar, compared to about LL4,000 on the black market. The aim is to curb the impact on the most vulnerable households, who spend a quarter of their budget on foodstuffs, according to the CAS. In a recent report by The Triangle, the think tank highlights that Lebanon’s dependence on imports of essential foodstuffs and the lack of local alternatives threaten the food security of the poorest.

But the president of the Syndicate of Importers of Foodstuffs remains realistic. For Bohsali, these foreign currency injections, which are expected to range between $60 million and $80 million per month, will not change the situation. “The mechanism only covers a small number of products; other essential goods such as pasta or diapers are excluded,” he said. Moreover, the proposed rate, more than twice the official rate, is far from ensuring a return to pre-crisis prices.

Some observers also question the sustainability of the scheme, which relies on dollars collected by the BDL from money transfer companies, now obliged to pay the money received in foreign currencies to their clients in Lebanese pounds, at a rate of LL3,200/dollar.

“Is this source of currency sustainable, knowing that transfers from abroad through non-banking institutions are likely to decline?” Bohsali asked. “The BDL’s reserves are in free-fall and cannot sustain such a segmented market indefinitely,” Hamdan said.

The control of trader’s profit margins

Helpless about the pound’s fall, the government decided to fight abusive trade practices that may also foster inflation. While “the exchange rate crisis is the main driver of inflation, one should not exclude that some actors are taking advantage to serve their interests,” said Albert Dagher, chairman of the economics department at the Lebanese University. Both importers, distributors and traders are accused to increase their margins to hedge against exchange risks and economic deterioration. These opportunistic behaviors are made possible by the oligopolistic structures that dominate the Lebanese market. In a report submitted to the Economy and Trade Ministry in 2003, Hamdan underscored the need for a competition law. “The study concluded that about half of the markets in Lebanon were in an oligopoly situation and that a third of the markets was controlled by a single company by more than 40%,” he said. This concentration allows players to implicitly agree on overvalued prices, without being penalized by the market.

In the absence of a competition law, the only tool currently available to the government is a 1972 decree allowing it to cap margins on certain categories of essential products. The Economy and Trade Ministry recently reactivated this decree through publicized inspections of shops and supermarkets. “Abuses have been reported in about 10% of cases,” the Economy and Trade Minister said.

However, this scheme only applies to a limited number of products and does not apply to importers. ”This kind of action is very difficult to implement since you need to know the price’s structure of each trader. This is why it usually surfaces only in times of crisis like the current one,” an economist said. On the other hand, the fines imposed, with little dissuasive effect, can take several years before they are actually paid, if ever.

To correct these loopholes, the Economy and Trade Ministry is working on two new bills. One is meant to strengthen margin controls “across the chain, including controlling importers’ profits based on their record, updating the list of essential products with capped margins and strengthening penalties for abuses, including fines to be paid immediately,” Nehmé said. The other bill is meant to encourage competition.

However, the adoption of these texts is not expected “before next Fall,” according to the Minister.

In the meantime, the battle against inflation is already a lost one. “Historically, oligopolistic structures have almost always pushed the price curve above the dollar one. Today, the dollar has appreciated by more than 180% against the pound, while the price index is up 18%. If you follow long-term trends, you can expect the price curve to catch up with that of the dollar,” Hamdan said. This will be especially true in the event of a formal devaluation, which is one of the conditions mentioned to get aid from the IMF. The government’s reform plan has thus predicted an inflation rate of 53% in 2020 and 23.3% for next year.

Many products will then become inaccessible to a large section of the Lebanese, and this will profoundly affect supply and demand. This is already the case for products deemed non-essential.

“Our sales have plummeted by 70%: Anything that is no longer considered a priority is no longer sold,” said Christophe Antaki, the associate manager of Antaki Group, a distributor of high-end appliances. “Many products are out of stock,” added Antaki, who plans to position himself on more affordable brands.

This trend was confirmed by customs figures: In value terms, imports fell by 40.8% in the first quarter of 2020, particularly those of cars, which fell by 69% in the first four months.

Even in foodstuff, “20-30% of brands may disappear from the shelves,” said Nabil Fahed, vice-chairman of the Chamber of Commerce, Industry and Agriculture of Beirut and Mount Lebanon and owner of Fahed Supermarkets.

However, Bohsali dismisses the risk of severe shortages. Essential products, he said, should remain available for those who can afford them.