While part of the city is still under rubble, homeowners have been approached to sell their property in the affected areas. While such steps were expected, they reflect gentrification risks in the area. 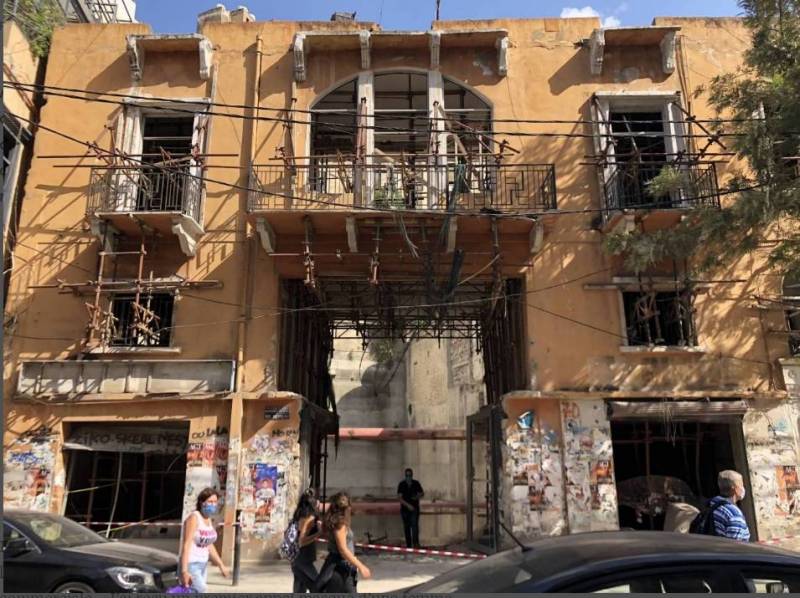 It barely took a week for some to see the double explosion that devastated Beirut as a business opportunity. "I received a first call from a private number by a woman claiming to be an employee of a subcontracting company offering its services for the reconstruction of my house, which was badly damaged. I declined the offer, and in the afternoon, I got a second call, from the same person, asking me this time if I was interested in selling my property for a good price. I had just come out of surgery, the ground had barely been cleared: I couldn't believe that one could be so insensitive at such a dramatic moment. I have no idea how they got my name or number," said Nabil, a Gemmayzeh resident whose house was blown up by the explosion, still in shock.

According to a UNESCO press release, some 8,000 buildings, including 640 historic ones, located mainly in the old districts of Gemmayzeh and Mar Mikhael, were affected. Sixty are even threatened with collapse.

On social networks, testimonials from owners like Nabil, whose devastated properties arouse the appetite of "vultures," are multiplying. "It often happens in this kind of tragedy that oppor-tunistic interests try to take advantage of the situation to acquire properties at very discounted prices," explained Bruno Marot, a holder of a PhD in urban policies and associate researcher at the "Institut Français du Proche-Orient (IFPO)".

The news quickly sparked a wave of indignation among the public, who feared that the dam-aged buildings would be replaced by more modern buildings or high-rise residential towers, which are more profitable than the small buildings that dot the majority of affected areas. This would carry a risk of gentrification and social reconfiguration, similar to the post-war recon-struction model of downtown Beirut, which was undertaken by Solidere. But the post-war analogy stops there.

"Solidere is a private company that alone had a mandate for 150 hectares in the heart of Beirut, whereas today, the risk comes mainly from private and fragmented initiatives," said Mona Fawaz, professor of urban planning at the American University of Beirut (AUB). "The disaster could indeed have attracted the interest of private individuals, who in the midst of the economic crisis would have seen an opportunity to invest their blocked deposits in banks," she added.

The hypotheses are going well, but for the moment, the mystery remains as to the origin of this soliciting. "It doesn't come from the members of our unions," assured Walid Moussa, president of the Real Estate Syndicate of Lebanon (REAL), which represents 160 companies and individu-als. It is "not illegal to inquire about prices, but it is above all a question of ethics."

The interest of real estate developers in these neighborhoods must not be surprising. "These regions are home to many buildings that fall under the law of old rents – [a law freezing rental contracts signed before 1992]. Before the tragedy, many landlords were already trying to get rid of their properties which, although located on very expensive land, brought them little ren-tal income," said Marot.

The disaster would risk accelerating this change by facilitating the eviction of tenants, especially since the destruction of the building is one of the rare cases in which the law allows the contract to be terminated. "Many tenants are afraid they won't be able to return home," said Fawaz.

Faced with these fears, a circular issued on Wednesday, August 12, by the outgoing finance mi-nister, Ghazi Wazni, prohibited the sale of traditional and historic buildings listed by the Direc-torate General of Antiquities, without prior approval of the Culture Ministry throughout the pe-riod of reconstruction of the affected areas. According to Jad Tabet, president of the Order of Engineers and Architects, this is a necessary first step to protect heritage and tenants: "Heritage properties are the buildings most affected by the explosion; they are also the most at risk in terms of land status, as they accommodate many tenants with contracts governed by the law of old rents."

As for buildings which are not listed, "no change in the land register will be possible without the agreement of the Culture Ministry," said Beirut Governor Marwan Abboud who insisted on the need to preserve "the original state of the premises."

These measures effectively suspend all real estate transactions, pending at least the results of the investigation that begun Wednesday, August 12 by the Order of Engineers and Architects and which will establish the buildings that can be rehabilitated. "It will then be crucial not to leave the reconstruction policy to private initiative but to frame it so that it can respond to the general interest and not to the demand for profitability," said Marot.

"Reclaiming the Discourse on Reconstruction"

This is therefore a pivotal moment. "The crisis is an opportunity to reclaim the discourse on re-construction, long monopolized by Solidere, and to focus on the citizen," said Jamil Mouawad, activist and researcher.

Funding methods will also be crucial. "For Solidere, financing was done through fundraising on the financial markets, requiring significant returns on investment; which dictated the form of reconstruction. The international community may have a role to play, by making available very low interest rate loans through development banks; allowing reconstruction that would not be dictated by profitability", said Marot. It remains to be seen how the Lebanese state, in the midst of a crisis of legitimacy, could obtain such financing.

This article was initially published in French on Thursday, August 13, 2020