Two villages use solar energy to make up for power cuts and avoid depending on generators. Is Lebanon finally starting to take the path of solar energy? 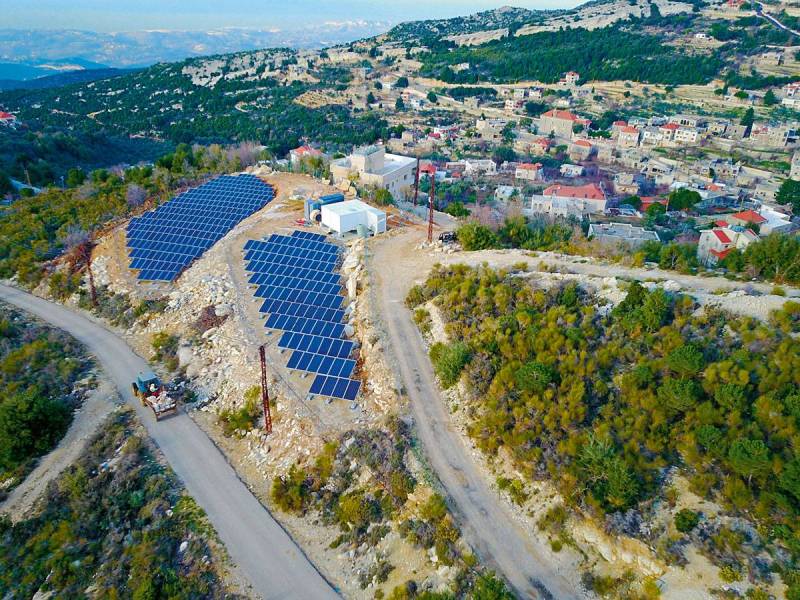 Saying the air in Lebanon is polluted is an understatement. The actual levels of nitrogen dioxide (NO2) are close to 63 micrograms per cubic meter of air, much above the limit of exposure to these fine particles, which are responsible for lung cancer, set at 40 micrograms per m3. On the map recently published by the European Space Agency, these levels put Beirut at the same level as a megacity like Cairo.

The main factors of pollution are of course cars, but also electricity generators. The Lebanese have no other choice but to resort to generators, since the government barely provides an average of 10 to 12 hours of power a day, depending on the area.

Atmospheric pollution (here NO2) from Apr to Sep 2018 derived from Sentinel. Main EU cities but also tracks of the merchant ships visible from Suez to the Channel... pic.twitter.com/XowGxCRybM

Yet, with around 300 days of sunshine a year, Lebanon could be a pioneer in green energy. Nonetheless, solar power - one of the main sources of sustainable energy - represents today only 0.35% of the electricity produced.

Some initiatives do however bring hope: two villages, one in North Lebanon and the other in the South, collectively use solar panels to supply electricity 24 hours a day for the residents, in order to reduce - and ultimately avoid - the use of generators. "We were looking for an environmental alternative to generators”, Rachid Geagea, president of the municipality of Bchaaleh, explains. Year-round, some 250 families live in the village that started the project in 2018.

At the experimental stage

In this village of Northern Lebanon, the municipality got in touch with Energy 24, a manufacturer of energy storage systems. It was the possibility of conducting a "pilot project" that convinced the company to invest $650,000 to build a solar park with a 300 kilowatts-peak (kWp) capacity, connect it to the networks, install batteries for a period of ten years, as well as meters. "We signed a nine-year renewable contract, to provide 10 amps of power at the time of the cuts. I will not cover my investment, but I’m proving that my technology can work for large-scale projects”, Antoine Saab, CEO of the start-up founded in 2011, says.

Energy24 has already done more than 150 projects, most of them for individuals or companies. But the firm needed to test its technology on a larger scale to convince communities that these batteries could effectively replace the generators during power cuts. Its bet seems to be successful: the neighboring villages of Tartij and Jej have already signed up for a similar package.

As for Kabrikha, a village in Southern Lebanon, the project started earlier, in 2015, prompted by the Cedro agency of the United Nations Development Program (UNDP). Called "Village 24", it intends to prove, like Bchaaleh, "that there are alternatives to generators that are at the same time environmentally-friendly and economically viable”, says the UNDP agency. About a hundred homes (out of 400 in the village) have chosen photovoltaic. The United Nations has funded a $ 300,000 donation to install a solar plant with a capacity of 250 kWp. In exchange, Kabrikha offered the land on which the station and the connection infrastructure were installed.

When the electricity is cut off, the solar supply provides a variable intensity, according to the counters installed in the homes. The running costs are borne by the municipality, which does not require, for the time being, financial contribution from the residents.

So what convinced the residents to switch to solar energy, other than promoting green energy? Financial savings, according to Rachid Geagea : “using solar energy makes sense : it's available and less and less expensive”.

A few years ago, such a project was indeed still difficult to conceive: in 2011, a solar kWp could cost up to 7,186 dollars, according to a UNDP study. Since then, however, the improvement of solar technologies has led to a considerable drop in costs. In 2017, the cost of a kWp was $ 1,545, nearly 80% less, according to the UNDP. "This drop has greatly facilitated access to solar panels”, says Cedro.

But how do residents pay their electricity bills? In Kabrikha, the UNDP has chosen to adopt net metering technology - which has been authorized in Lebanon since 2011. An individual or a collectivity owning photovoltaic panels will use this "net billing" method to subtract its production of energy from its consumption. Electricité du Liban (EDL) measures household consumption through a bidirectional meter, a very accurate system according to the state-owned company, and only the net difference is billed and paid by the user. And when the solar electricity production exceeds the village consumption, this surplus is "donated" for free to the EDL network.

In Bchaaleh, the system is different: the municipality relies on a private actor to get power during EDL cuts, just like it did with power generator owners. With a big difference however: Energy 24's batteries store some of the energy generated by its solar power station before transferring the surplus free of charge to the EDL network, as is the case in Kabrikha.

Energy 24 bills the energy produced: it offers prepaid cards for a 10 amps current, for 400 Lebanese pounds per kilowatt. On average, households pay a monthly bill of about $ 20. "This represents savings of $ 40 to $ 60 per month, depending on the season and the homes, compared to generators”, Rachid Geagea specifies, who says he is "extremely satisfied" with the system put in place.

But for solar power to prevail against the ‘generator mafias’, it must have a legal framework for its production and resale, which is not the case.

If net metering has been authorized for individuals in 2011 (90 households have so far opted for this solution individually, according to EDL figures), the collective version, like the one implemented in Kabrikha, remains in theory forbidden. "Kabrikha's solution owes its development only to its experimental status”, Pierre elKhoury, of the Lebanese center for energy conservation (LCEC), says. And this status will remain until the end of 2019, to allow EDL to learn from it before considering similar agreements with other communities.

The legal framework remains unclear in Bchaaleh as well. "We are in this gray area where the generator owners also are. We are tolerated only because EDL is not able to fulfill its duty. But legally, we do not have the right to exist”, Antoine Saab argues.

To this day, Lebanon produces 8% of its energy through green technologies and expects to reach 12% by 2020. Given the projects launched, this objective should be achievable. But the lack of adequate legislation only makes such an objective even more difficult at a time when the country still has a deficit of about 1,000 MW in electricity.