With the adoption of Vision 2030, Saudi Arabia aims to become a growth driver for the entertainment industry in the region. In the world of entertainment and cinema, Lebanese companies are among the first to position themselves in this new market, despite its uncertainties. 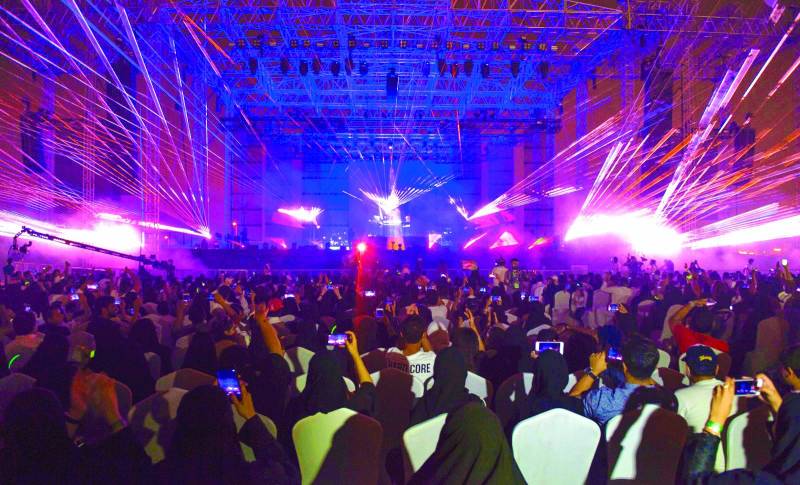 Sean Paul, Mariah Carey and the DJ Tiësto recently took to the stage in Saudi Arabia, performing in concerts that just a few months ago, would have been unthinkable. Over 20,000 people gathered in early February at King Abdullah Economic City (KAEC), a special zone north of Jeddah, to watch the exceptional performances by these three international superstars, as well as a concert by Emirati singer Balqees.

The Wahhabi kingdom had banned pop concerts for two decades, but following the first ever pop event in 2017, in front of an exclusively male audience, many others have followed, moving on from female only concerts and dancingor “swaying” bans to mixed gender electronic music festivals.

This transformation was championed by Crown Prince Mohammed Bin Salman as part of his Saudi Vision 2030, which was unveiled in April 2016 and which aims to make the entertainment sector one of the engines for the diversification of the Saudi economy.

After Saudi Arabia relaxed religious restrictions on entertainment, music events and other recreational activities have multiplied over the past two years. The recently established General Authority for Entertainment (GEA) has so far organized over 3,200 "days of recreational activities" drawing in some 19 million visitors, while over 500 Saudi companies were established in this sector in 2018 alone, according to the General Investment Authority (Sagia).

The Lebanese are first to position themselves

Known for their experience in the entertainment sector, the Lebanese saw an opportunity with the awakening of this sleeping giant. They were the first to position themselves in the world of Saudi entertainment, as well as in cinema, which was reintroduced in early 2018 more than 35 years after the Kingdom prohibited movie theaters. Increasing numbers of Lebanese are now exporting their know-how to the Kingdom, despite the uncertainties about such forceful economic and social liberalization.

One of his suppliers and a compatriot, Joseph Hannoush, who specializes in the development of theater venues, gave him his first foothold in the Kingdom. In 2016 Hannoush had established a company named 360 Production with Saudi partners, to manage events for private companies, including the oil giant Aramco.

In 2017, when Hannoush first learned that GEA – which is responsible for selecting and licensing private suppliers – was seeking to bring in Greek musician Yanni to perform in Saudi Arabia, he proposed the idea to Naji Baz and offered him a partnership. Together, they organized the first ever tour of a Western artist in the Kingdom with six concerts scheduled in Riyadh, Jeddah and Khobar. Yanni’s tour sold more than 23,000 tickets in just two days.

Over the past several months, the number of concerts has multiplied, with Guy Manoukian, Abu, Jean-Michel Jarre, Magida el-Roumi, Sean Paul, Mariah Carey, and Tiësto all performing in the Kingdom, with the last three organized entirely within the span of just one week by 360 Production.

Like him, Pierre Tabet, owner of the Dubai based, Seven Production company, is increasingly active in the Kingdom. Specialized in television broadcasting events, he has been working in the country for around ten years.

In 2018 he opened an office in Riyadh and invested more than five million dollars in equipment to meet the new demands in the market. Having the equipment on site allowed Tabet to win the rights to broadcast National Day festivities on TV, among other deals.

Betting on the cinema market another Lebanese, Gino Haddad, has set is foot on the local cinema market. His group, Empire, which operates ten cinema complexes in Lebanon, and has a presence in Egypt and Iraq, won the third of four licenses granted by the Kingdom in July 2017.

"For us, it's much more than a leap forward, it's a paradigm shift. The rise of Saudi Arabia in the film industry could lead to a jump in turnover by 60 to 70% in this sector in the region", said the CEO of the group at the time.

Also ready to seize this chance was Carlo Vincenti, the exclusive distributor of Disney studios in the Middle East. His company, Italia Film Production, screened Black Panther, a Marvel branded superhero movie, which was the first film released in the theater in Saudi Arabia in April 2018.

He says he currently controls 60% of the Saudi market, and his competitors are also Lebanese. "Among the fifteen or so actors in the distribution business, almost all are Lebanese," says Vincenti.

A market with high potential

Saudi Arabia has become a magnet for entertainment professionals owing to its population of over 33 million, of whom 70% are under 30, meaning the market has enormous potential.

“It is probably one of the sectors with real local growth potential as demand is large and catch-up potential considerable,” said Steffen Hertog, associate professor at the London School of Economics.

Until recently, this thirst for leisure could be quenched by visiting Saudi Arabia’s Gulf neighbors, but “if well handled, some of this demand can be brought back home,” adds Hertog who specializes in Saudi affairs.

By launching activities on their own soil, Saudi authorities hope to increase the share of cultural and entertainment spending in the budget of Saudi households inside the Kingdom to 6% by 2030, compared to 2.9% in 2016. The Kingdom has the potential to become a "growth engine and an added value for entertainment in the region”, said PwC consultant Abhijat Sharma in a press conference in late 2018.

In the meantime, the sector continues to be driven mainly by the GEA, which is responsible for funding all or part of each event. "If we had to rely on the sale of tickets, our events would not be profitable because they are too expensive to organize, especially because of the very high fees charged by artists in this new market," says Joseph Hannoush.

The budget for a concert like that of Sean Paul, Mariah Carey and Tiësto in Saudi Arabia is estimated at more over 30 million dollars, which cannot be covered by ticket sales alone, no matter how expensive a ticket may be. "Basically, the maximum price of a ticket in Lebanon - around $150 - is the minimum price in Saudi Arabia," Hannoush explained.

To finance the rapid development of the sector, the GEA, now chaired by Turki al-Asheikh, a close associate of the Crown Prince, announced in February 2018 a $64 billion plan over ten years to support the entertainment and culture sectors, whereby state spending would be gradually replaced by private investments, which is still lacking at the moment.

From dream to reality

However, the ambitious development goals announced by Saudi authorities seem to contrast with reality. The country’s intermediate plan "Quality of Life 2020", unveiled in early 2018, to put the Kingdom on track to implement Vision 2030, seeks to improve the cultural infrastructure, including the number of concert halls, from about 150 today to more than 400 by 2020, and to multiply cultural events by a factor of nearly 20.

The government is also planning to build 45 cinema complexes by 2020 which would generate 3.6 million annual admissions.

But so far only two complexes with 16 movie theaters in total were opened by Vox with one movie theater opened by AMC Theaters. "Shopping centers were not built to host cinemas; we have to wait for the infrastructure to adapt and to build new locations, which takes time," explains Gino Haddad, who has yet to operate a movie theater, one year and half years after obtaining his license.

The AMC Theaters cinema at King Abdullah Financial District in Riyadh is actually a converted conference hall. The Kingdom is still far from the 350 complexes initially promised in Vision 2030.

While demand certainly exists in Saudi Arabia for this type of entertainment, the total absorption capacity of the market is still not known. The few existing cinemas are now overcrowded, but apart from major cities like Riyadh or Jeddah, will the inhabitants of other cities meet the boom in supply? "

The average ticket for a movie theater is relatively high, $15, like in Dubai," says Carlo Vincenti. However, per capita income is now lower in Saudi Arabia than in the United Arab Emirates, Kuwait or Qatar, according to World Bank data, and 20% of the population lives below the poverty line, according to a study published in 2014 by the King Khaled Foundation.

Investors remain alert to the changing business climate in Saudi Arabia, whose improvement was one  of the goals set out in Vision 2030.

Several efforts have been made to improve the regulatory and legal framework in the Kingdom, the most emblematic of which was the introduction of a law on bankruptcy that entered into force in August 2018. Sagia has also simplified its licensing application process, which is mandatory for foreign investors.

Nevertheless, some regulations still complicate the entry of foreign companies to the market. For example, the obligation to associate with a local Saudi partner is a serious obstacle, despite the advantages for those who are able to find a partner with good connections. However, sometimes it is difficult to get connected and partners are often inexperienced.

"I was introduced to a potential first partner I did not trust, he was going through financial difficulties," says Hannoush. "It was only by chance that I met my current partners who had contacted me to organize an event."

Moreover, the quotas imposed by the Ministry of Labor to promote the nationalization of jobs, also known as "Saudification" with the number of expatriates currently five times higher than that of nationals in the private sector, is challenging for companies.

"Getting a work permit for a non-Saudi has become a lot more expensive and complicated," notes George Elias, managing director of Roberts Group. Elias, the owner of Cosmocity in downtown Beirut, who has also been providing his services for several years in the Saudi market, sees the development of cinemas as an opportunity for his arcade game franchise, but he deplores the slow evolution of the sector.

Like many, he has kept his expectations under control. "Everyone is getting ready, we are waiting to see what is really going to happen," he says.

The fact that the new authority regularly makes sudden changes is not reassuring for investors. The arrest of hundreds of Saudi figures in November 2017, the announcement of economic retaliation against Canada in August, and finally the assassination of Saudi journalist Jamal Khashoggi last November, have all harmed the discourse around economic and cultural liberalization in the Kingdom.