Efficient and cheap, the bus line connecting the south of the capital to its northern districts owes its success to sound management by a group of individuals who ensure that it functions properly. The success of the #4 bus route is not enough to mask the miserable reality of public transportation, which has been grossly overlooked in terms of public policies. 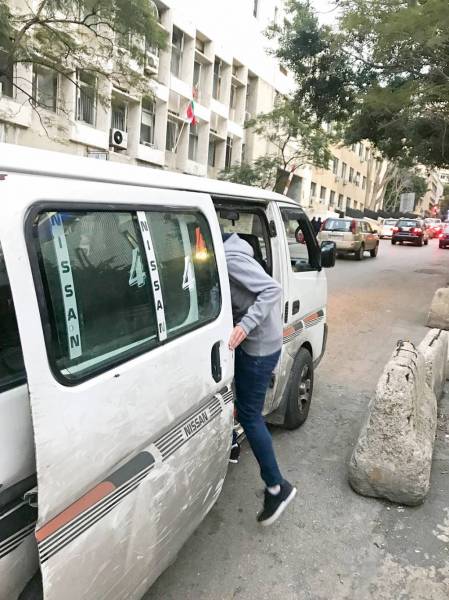 It is 6:00 pm. Three mini-vans billowing black smoke are parked at the beginning of Hamra Street.

One by one, these vehicles, each of about fifteen seats, fill up with passengers before charging forth into the traffic jam. These mini-vans cover the city center, Ras el-Nabeh, Tayouneh, and Chiyah, before finishing their route at Hay el-Sellom on the outskirts of the Lebanese University campus, a journey of nearly 10 kilometers, from north to South. Like many other minibuses, Nassim's bus is an old, rusty carcass.

On board, a man in his sixties, his head covered with a keffieh, sits behind two young girls. At the front, a woman sits next to a man wearing a light suit. "I came to visit friends in Hamra, and I am going back home to Haret Hreik," says Ali, a 36-year-old bank employee. “I usually use Uber, but with these traffic jams and the time waiting for the taxi, I prefer to take the bus” he adds.

For their part, the two university students say they use this bus route at least three times a week to get to their classes, while the man in the keffiyeh says he is visiting relatives in Bechara el-Khoury. Welcome on board Welcome on board bus # 4, commonly nicknamed "andaf khat bi lebnen”, or "the most decent bus line in Lebanon" by its users.

On Facebook, bus #4 even has its own fan page with some 12,000 followers. Users post photos of their journeys, while drivers share stories from their daily lives. Its single fare - 1,000 Lebanese pounds ($0.60), which has remained the same since 2000 - is unbeatable.

"This is the simplest way, and especially the cheapest, to get to college” says Chérine, an AUB student living in the south of the capital. No service (Lebanon’s carpool-style taxi scheme) driver would deign to offer a passenger such a ride for less than 4,000 Lebanese pounds ($ 2.60), she adds. Uber or Careem charge more than 13,000 Lebanese pounds ($ 9) for the same trip.

According to Ministry of Public Works and Transport records in 2015, of the five million journeys taken each day in the capital and its suburbs, 68% were made in private cars, the average occupancy rate of which, at 1.3 persons per car, remains low.

An authority inherited from the French Mandate

It should be noted that the public transport services on offer have generally been limited and of poor quality. The Railway and Public Transit Authority, inherited from the time of the French Mandate, holds a monopoly over the public transportation sector throughout Lebanon.

But its role has largely declined, to the extent that it now only operates 35 decayed buses. As a result, the informal sector has taken over: there are currently 2,200 private buses and about 4,000 vans (or minibuses) with a red license plate (i.e. that are officially registered and legally authorized to transport passengers) carrying commuters on their journeys across Lebanon, in addition to 10,000 buses working illegally all over the country. Added to this are service taxis, vehicles that operate in a kind of shared carpool, numbering 33,000 legally registered vehicles and another 20,000 working illegally, according to the World Bank (2018).

Amid this chaos, bus route # 4 seems almost an exception. In addition to its low fare, its regular frequency contributes to its attractiveness: vans take off at around six in the morning and stay on the road until around midnight. They have no defined stops, just hail the bus and it will stop. They, however, maintain a regular rotation through a network of some 200 vans (including twenty large buses), according to the two researchers from AUB.

"This is a success story compared to the twenty or so other lines that criss-cross Beirut and its suburbs with uncertain frequency," says Chadi Faraj of the Bus Map Project, an NGO that has mapped public transportation services in the capital.

Theoretically speaking, all you need is a valid driver's license and a vehicle with a red license plate, to provide a public transport service in Lebanon. But in practice, to work on bus route # 4, you must be close to the Z’aiter tribe."We all belong to the same family," says one of the men who describes himself as a manager of the bus route.

The Z'aiter clan, originally from Kneisseh (in West Békaa) - with some 9,000 members in Lebanon - took control of this bus route in 2000, after ousting the Lebanese Commuting Company (LCC), a private company founded by Khalil Zantout, which began operation in 1995.

The transition between the two suppliers was not smooth: several buses were set on fire before the LCC gave in.

According to Petra Samaha and Amer Mohtar, two of the three "bosses" of this bus route are associated with the Union of Haret Hreik Drivers, which is affiliated with Hezbollah, and the third is affiliated to another union linked to the Amal party."These bosses are welded both by their financial interests, and their sectarian (Shia) bond, or assabiyya", say the researchers.

Ali Z’aiter simply introduces himself as "one of the managers of the line". Sitting in the shade of a hut in the al-Malak car park, a terminus of route #4. Watch in hand, he regulates the traffic by giving a van driver permission to leave every five minutes.

He is also responsible for collecting the daily 15,000 L.L ($10) fee that each driver has to pay to work the route. He says the sums collected from the drivers serve to finance the hiring of the car parks (besides al-Malak, bus route # 4 has two other terminals in Hay el-Sellom and at the Lebanese University campus) from various municipal authorities and to remunerate the "line managers".

The drivers themselves can earn $70 to $80 a day. "That's what I have left after paying parking fees and about $20 for gas" says Youssef, who drives a van that was imported from Vietnam a year and a half ago and is worth $23,000. The 34-year-old also owns another minibus that he leases to occasional drivers for 40,000 Lebanese pounds ($26.70) a day.

"The financial system that helps these drivers acquire a fleet is rather opaque," said Rami Semaan, managing director of TMS Consult, a company specializing in urban mobility.

According to another testimony, given on condition of anonymity, the drivers finance themselves through the line’s sponsors, Amal and Hezbollah, who provide them with zero or low interest loans.

"We must demystify the success of route 4," says Rami Semaan. "In a context where no alternative public transport exists, its service can certainly be considered a success.

But this line, which has developed due to the absence of a public network, is not subjected to any regulations.  Intervention by the Lebanese authorities remains marginal: they set the price of the trip and publicize environmental regulations that, for example, ban the use of diesel vehicles (which not all drivers respect).

"We could improve their services on the margins: encourage the acquisition of "real buses", urging drivers not to smoke indoors, or to change their itineraries unexpectedly ... But they are difficult to control. Mainly, no real improvement is possible without looking at cutting travel times. It is not just that the operators of route # 4 have little flexibility here. Worse, they contribute to traffic jams, "says Fadi Darwish, director of Sets, an engineering company with a department dedicated to transportation.

This is a major problem for the capital and its suburbs, where the density of traffic and the state of the infrastructure, specifically the roads, are major obstacles to the development of its economy.

In a study (from 2005), the Minister of Environment estimated the cost of urban congestion at 8% of Lebanon's GDP, at a time when traffic was well below the levels seen today.

What solutions do we have? "Nothing can be achieved without a strong political will," says Fadi Darwish. His colleague Rami Semaan agrees: "Reducing traffic and congestion requires a change in the current mode of transport, namely private vehicles. But to convince commuters to make the transition, we have to show that public transport would save them a lot of travel time and money.” A condition that the operators of bus route #4 are obviously incapable of meeting alone.

In March 2018, the World Bank allocated $ 295 million to finance the development of public transport in Lebanon. The project involves the establishment of a privately operated express  BRT (Bus Rapid Transit) network, which would have reserved traffic lanes, between the town of Tabarja and Beirut, covering a distance of about 40 km.

Some 120 buses would be dedicated to this route with another 250 feeder buses in the capital. "The government will have to work not against the informal lines, but with them," says Ziad Nakat, a World Bank representative in Lebanon. "A private operator who would like to invest will, for example, need local assets (route managers, the drivers, etc. ...), and it will have to involve the actors already on site. This type of model has already proven its worth in many countries such as Mexico."

Ali Z’aiter does not agree. Asked if one day the Lebanese authorities, or a private operator could join route # 4, he responds with a defiant smile: "Let them try, and we'll see."

This article was first  published in French