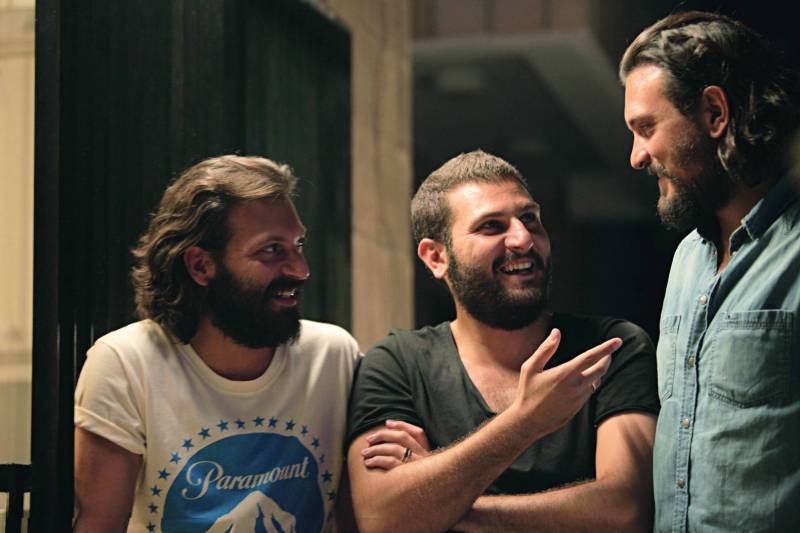 With the upcoming screening -scheduled for June 13- of Netflix’s first original arabic series “Jinn”, the Bou Chaaya brothers are both excited and satisfied: the successful partnership with the American streaming giant came to crown the career of Mir Jean, the youngest of the brothers. At the age of 30, the young Lebanese director already has to his name eight short films, a television series, and the movie “Film Kteer Kbeer” (Very Big Movie), which received rave reviews from critics when it was released in 2015. “Mir Jean Bou Chaaya brought to Lebanon an American touch, a type of mafia cinema”, says Wissam Charaf, director of “Fallen from the Sky” (2016), who along with the Bou Chaayas, Nadim Tabet, and Mounia Akl among others, represent the new wave of Lebanese cinema. “Film Kteer Kbeer’” was very successful, a good quality popular movie.”

The young director appeared on Netflix’s radar in the fall of 2017. At the time the company had just reported its quarterly results: 3 billion dollars turnover (up 30% over one year), and an annual forecast of 11 billion. The Video on Demand (VOD) platform, which back then had more than 110 million subscribers (139 million today), took the opportunity to announce the injection of 8 billion dollars into the creation of series and original movies made outside the USA. The strategy was clear: reinvest the profits generated in the domestic market to finance its international development.

In November of the same year, Netflix introduced Mir Jean Bou Chaaya to the Dassani brothers (Elan and Rajeev), a duo of American directors who were working on a fantasy series in Jordan. “Netflix asked me to be part of the production team, and also wanted our company, Kabreet, to deal with the executive production along with the Dassani brothers.” The project started taking shape at the beginning of 2018. In order to facilitate the process and benefit from the help that was offered by the Hashemite authorities, Mir Jean and his two associate brothers opened a subsidiary of their production company in Jordan (Kabreet Productions LLC). The series was shot in summer 2018 and was ready in fifty-two days.

Some rumors reported friction and some difficulties on set. But, according to Mir Jean Bou Chaaya, “we had plenty of freedom; the advantage of working with Netflix is the communication: we were able to exchange a lot and benefit from their experience.”

One of the other benefits of an alliance with the US giant –in addition to the series being broadcast in 191 countries- lies in the funding mechanism. There are no distributors, no sales agents or movie theatres to pay. “It is pretty simple,” says Lucien, one of the two older brothers. “Netflix finances and distributes. We produce.” However, when it comes to the budget, the Bou Chaayas are less vocal. “We did not lack anything”, says Lucien. An equally evasive Mir Jean, speaks of a “relatively big project on the regional scale”. In the kingdom of Netflix, the disclosure of financial data is considered treason. According to the head of a production company, “the budget is probably over a million dollars given the size of the project.”

The birth of the trio

Mir Jean Bou Chaaya’s first steps behind the camera took place in 2008, at the film school of the Lebanese Academy of Fine Arts (ALBA). “He was a very happy and cheerful student, but at the same time very straightforward and orderly in his work,” recalls the director of the film school Alain Brenas. In Brenas’ class, the apprentice director evolved within a close-knit and creative group. He was a good friend and helped others with the short films they made as graduation projects. His would be called “Film Kteer Kbeer”. The film is the story of two brothers who decide to smuggle cocaine via film reels, which are exempt from checks at airports, and embark on the production of a movie with an unlikely scenario. “ALBA provided us with film equipment, but we still needed $10,000”, remembers Christian who at the time helped his brother raise money among their relatives.

The film, presented in 2012 as a graduation project, ended up being invited to a handful of festivals. Selected at the Freiburg, Oberhausen and Medfilm Italy festivals, it went on to win first prize at the Casablanca Student Film Festival (FIFE), at the European Film Festival, and at Notre Dame University-Louaize (NDU). Like Ziad (Alain Saade), the main character in his movie, Mir Jean Bou Chaaya worked with his two older brothers who would help him carry out his projects.  Born to parents who were more focused on Arabic literature than on cinema – a journalist mother and a father with a PHD, who would later become a priest,- the Bou Chaaya boys spent their childhood between Dekouane and Mtaileb, before finally settling in Dekouane. The elder pair, twins Christian and Lucien chose their own paths– one as a restaurant owner, the other as a lawyer- before joining with Mir Jean, who was one year younger and a gifted cinematographer. Julien, the youngest at 24 years old, is the only one of the four siblings who did not succumb to the allure of the movie set, choosing instead to work in health care

From short films to feature films

“Our collaboration was very organic,” says Mir Jean. “To summarize, Christian deals with production and issues related to the filming, Lucien with everything related to law, money and international relations, and I am on the creative side”. “The engine is Mir Jean,” says Michel Elefteriades the owner of Music-Hall, who invested in the producer early on. Their first meeting dates back to a dinner initiated by television presenter Marcel Ghanem in 2012. “Marcel had spoken to me about a gifted young man, says the businessman, and a master at finding new talent. He is intelligent and has a lot of energy. When I saw his work, I thought he would be the greatest director of his generation.”

Immediately after graduating, Mir Jean Bou Chaaya wanted to move fast. “I wouldn’t say he is in a hurry, but it is true that when he has an idea, it is hard to stop him”, says Alain Brenas. In this case, the idea was to shoot the long version of his short film. The brothers wanted to avoid the problems of co-producing with a foreign company, such projects are often subject to deposits and endless file reviews. The Bou Chaayas, therefore, opted to seek private funding, almost all Lebanese (the film did benefit from $40,000 from the Doha Film Institute for post-production support). They solicited family and friends, mortgaged an apartment, and took advantage of the positive feedback about the short-film to set up a team of eleven investors. Total budget: $900,000. “I was more in a process of patronage than of a business,” recalls Michel Elefteriades, who said that he put about 150,000$ on the table, and created the soundtrack of the film for free. I knew from the beginning that there were risks. It is rare to make money on a first film.”

“The movie theater takes 50% of the revenues,” says Lucien, “the distributor gets 10 to 20%, and same for the commercials… So unless the movie is a huge success, the money recovered by the investors in the end is very little.” “Film Kteer Kbeer” was completed in eight months. It remained in Lebanese theaters for thirteen weeks, cumulating nearly 60,000 entries. A great success for a local movie, but not enough to allow it to recover its costs. It only did so after being distributed in a dozen countries, and after the rights were sold to Netflix.

A model determined to exist and thrive

For the three siblings, this funding model is the best choice for independent filmmakers. “The Bou Chaaya brothers are not the first ones to try this framework,” says Philippe Aractingi, “but until today it is still very risky”. The 55-year-old director, pioneer of this approach with his film “Bosta” (2005), which was almost entirely financed using private money, highlights, among other things, that Lebanese movies do not export well, have weak returns on investments, and, of course, suffer from lack of public funds. “Without the State’s help, private money is not enough,” he says.

In 2018, the Ministry of Culture, which has one of the lowest ministerial budgets, handed out only $230,000 to the entire Lebanese film industry. “The amount is going to get further cut,” said a source at the Ministry of Culture during a discussion regarding the budget for 2019. “The cinema is a sector that contains real talent, and that needs to be well supported. It can be an economic lever and create new jobs, but unfortunately, there is no political will to do so”, says this source.

Nonetheless, Lebanese cinema has never been as productive; in 2018, twenty feature films were produced according to the Lebanese Cinema Foundation, compared with only one or two in 2005. The magic formula, used by movies like “The Insult” from Ziad Doueiry, or Nadine Labaki’s “Capharnaum”, seems to be a mix of private funds and public aid from Europe or the Gulf. “We experiment, we search for our way,” says Lucien Bou Chaaya.

In this consistently unstable ecosystem, that is flooded with talent coming from films schools around the country, Kabreet wants to be a catalyst for change. The brothers are currently producing the feature film “TV Society” directed by Robert Cremona and written by Fouad Yammine, the former talk-show host, which is scheduled for release in September. The $720,000 movie is 60% financed by private investors, 20% by Kabreet Productions, while 20% of the funds necessary for postproduction are still missing. “TV Society” is a critique about the difficulties of having a career as an artist in Lebanon. “I can understand that an artwork can be difficult to bring to life, but a director should not have to go through so many trials to see his film finally launched,” says Mir Jean Bou Chaaya. In 2015, when he received the Golden Star at the Marrakech Film Festival from Francis Ford Coppola for his film “Film Kteer Kbeer”, the director dedicated the prize to Lebanon, “my country which unfortunately does not believe in us, but in which we will always believe.”