The history of manufacturing in Lebanon, studied through the archives of Le Commerce du Levant, demonstrates the potential of the sector. But to exploit its full potential, Lebanon has to learn from the past. 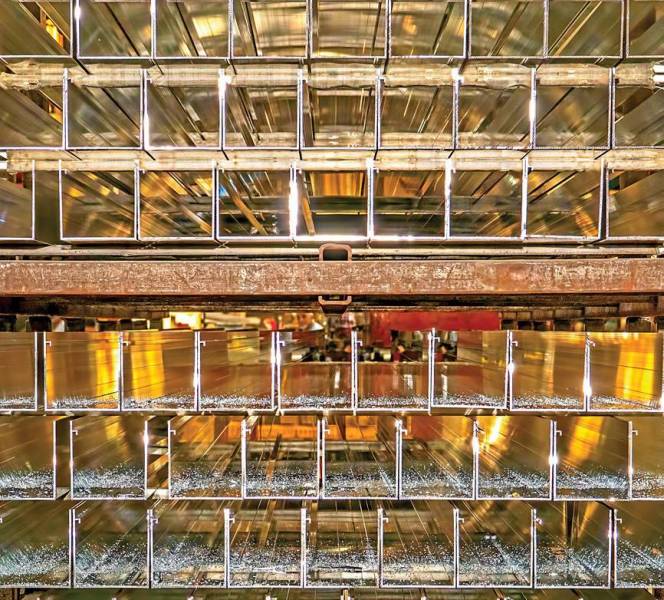 "It is unfortunate that Lebanon had to pay more than a million dollars to foreign consultants just to be told that it must support its industry," complained an economic expert, who like other Lebanese intellectuals has denounced the weakening of the productive sectors to the benefit of rentier activities for years.

Yet the study commissioned by the Lebanese government and conducted by McKinsey, a consulting firm, in 2018 can at least be credited with shaking up the conventional wisdom and ideological positions that have dominated public debate for nearly 90 years, whether regarding Lebanon’s economic model, the potential of her industry, or the role of the state.

Underscoring the need to develop productive sectors to create both jobs and sustainable growth, the study affirmed that Lebanon cannot be reduced to a country of traders and bankers. It also highlighted the potential of some elements of the manufacturing industry and their ability to become an engine for growth at a time where growth has been driven only by consumption and construction, albeit boosted by capital inflows. Finally, the report called on authorities to intervene proactively instead of taking a laissez-faire approach, to improve the competitiveness of a sector whose decline is more closely linked to the failings of the state than to its own intrinsic qualities.

Diving into the 90 years of Le Commerce du Levant archives might well have led us to the same conclusions. The history of Lebanese manufacturing is a story of both resilience and missed opportunities, of grandeur and decadence. Its contribution to GDP peaked at 18% in 1974 and has fallen back to 10% today.

In the beginning was the silk industry. "Before 1924, sericulture was the second leading [LP1] source of income for Lebanon after emigrant gold shipments (...) Two hundred factories worked almost all year long, using about four million Lebanese labor days," reads a Commerce du Levant article from 1951. But with the development of synthetic materials and the emigration of laborers, many industrialists abandoned the business and turned to more lucrative commercial activities.

It wasn’t until the period between the two world wars that a more modern and diversified industry developed, notably after the 1929 global economic depression, which allowed Lebanese industrialists to buy equipment and machinery at low prices. The partitioning of the regional market during the Second World War then allowed the industrial sector to flourish, sheltered from competition. Toward the end of the war, in September 1944[LP2] , Le Commerce du Levant explained that "the spinning, weaving, beer-brewing and canning industries have made massive profits during the war allowing them to completely amortise their facilities", but that "the period of easy profits has (...) definitely ended", because "local industries will now have to compete against their older counterparts, those of the West."

It was a shock when the first president of the young Lebanese Republic, Bechara el-Khoury, opted for a liberal economic model based on the free movement of goods and capital and a laissez-fair approach, with minimal state intervention in the economy.

This political decision worked against industrialization in Lebanon, says the economic expert Toufic Gaspard in his book "A Political Economy of Lebanon, 1948-2002: The Limits of laissez-fair", published in 2004. "No country becomes [LP3] industrialized spontaneously. To achieve this, we must protect the transition, offer incentives, and give years of direct or indirect subsidies to industry. If laissez-faire really could have really led to a strong and sustained economic development, then it would have happened already in Lebanon," he said to Le Commerce du Levant.

Although liberalism did not allow Lebanon to industrialize, it enabled the country to become a regional center for trade and transit in the 1950s and 1960s and to attract Arab fortunes fleeing from autocratic regimes and regional nationalization programs. The country experienced strong growth, which benefited the productive sectors through a ripple effect.

A study carried out at the time by the mission of the International Institute for Research and Training in Education and Development, directed by Father Lebret, and mentioned in Le Commerce du Levant in its November 1960 highlights the slow growth of the industrial (1 %) and agricultural (1%) sectors compared to services (7%), administration (5.8%) and transport (10%), as well as unequal income distribution, with 49% of the population making less than the mean national income.

Another article, published in January 1963, evokes the dynamism of the industrial sector which employs "75 000 employees", but whose development was hampered by "several factors", namely "the high cost of electric power, fuel and especially of oil, the high interest rate on short term industrial loans (7 to 9%), and the lack of skilled labor".

These factors, which remain highly relevant today, can largely be explained by the lack of public investment, particularly in education, by a state that taxed small and did little. The lack of any policy of economic rebalancing and social redistribution, with the exception of a short interlude under the Chehab administration, led to significant regional and social inequalities, and made Lebanon much more exposed to the situation in the region.

At that time, the regional situation was favorable. The oil shock in the early 1970s led to a new wave of capital inflows and boosted demand from Arab countries for Lebanese products. Exports jumped by 40% between 1970 and 1974, and the import/export ratio reached 60% (compared to less than 15% today). As for industry’s overall contribution to the economy, it reached its historical high, at 18% of the GDP.

The erosion of competitiveness

The war put an end to the boom. However, the economy held well during the first few years of the conflict, owing to immigrants and expats in the Gulf as the oil boom made it possible for Gulf countries to absorb the Lebanese labor force. In his book "Contemporary Lebanon: the elite, the outside and the failure of development", published in 2017, the economic expert Albert Dagher reports an increase in the number of emigrants from 98,000 in 1975, 52% of whom moved to the Arab countries, to more than 187,000 in 1979. This was translated on the financial level by remittances contributing 45% of the national income.

This was the beginning of the "economy of transfers" model that Lebanon had adopted. These revenues, originating from oil income, supported national consumption and enabled industries oriented towards the local market, especially agribusinesses, to survive. But they also led to a price hike of goods and services that eroded the competitiveness of Lebanese industries. In 1986, according to Albert Dagher, the number of jobs in the industrial sector had decreased by 34% when compared to 1970.

The devaluation of the Lebanese pound during the second half of the 1980s momentarily boosted the export competitiveness of Lebanese products, but the sector was constrained by the severe economic crisis caused by inflation and the loss of purchasing power in the local Lebanese market.

At the end of the war, no plans were put forward to help the industrial sector rebuild its production capacity. At the instigation of Rafik Hariri, the country had only one obsession: construction. To finance his major public infrastructure projects and the reconstruction of the city center, entrusted to the private company Solidere, the late Prime Minister sought to attract capital. He stabilized the exchange rate and greatly increased interest rates. Though money flowed, it did not have the desired effects.

With rates on the verge of outright usury, the public debt continues to increase without seeing any upgrades in infrastructure, especially electricity. The overwhelming majority of state spending was, and continues to be, what Albert Dagher calls "distributive spending," designed to reinforce the patronage and confessional nature of the new Lebanese power structure.

As for private capital, it has been mainly directed towards real estate that is soaring and is adding to the factors weighing on the competitiveness of the productive sectors.

At the same time, Lebanon is engaged in a policy of trade liberalization, particularly with the Arab countries and the European Union, which is subjecting the Lebanese production to stiff competition. "Some manufacturers have benefited from the support program funded by the European Union, but at the national level nothing has been done to prepare the industry for this liberalization," says an expert from the Chamber of Commerce and Industry.

By the mid-2000s, manufacturing’s contribution to GDP had already fallen to around 11.6%. With growth faltering, the Lebanese, especially the highly qualified, continued to emigrate en masse, emptying the country, and the industrial sector, of its most valuable resources. This massive exodus and the income transfers it created infected Lebanon with the so-called "Dutch curse", characterized by a loss of global competitiveness.

The third oil shock, from 2007, however, gave a breath of fresh air to the Lebanese economy, but the government didn’t seize this opportunity to make structural changes. On the contrary, the massive influx of capital reinforced the existing model. The funds were geared first of all to financing the public debt, which ensured very comfortable incomes for the holders of capital and the continuity of the "distributive" function of the Lebanese state.

A large part was channeled to the real estate sector and, finally, the rest financed consumption, and therefore largely imports. Despite the rise in exports, also boosted by rising regional demand, the trade deficit has exploded.

The war in Syria has accentuated existing imbalances. Border closures dealt a blow to industry as the cost of transportation exploded and exports collapsed. At the same time, the influx of refugees increased demand for commodities, and thus imports. The imports by exports /exports coverage ratio  dropped to a record low of 14.8% in 2018, compared to 23% in 2010.

Today, as the financing needs of the economy have exploded, under the effect of the rise in both the current account deficit and the public deficit, confidence in the Lebanese economy is eroding and capital inflows are lacking, despite the financial engineering conducted by the Central Bank.

This situation could, paradoxically, benefit Lebanese industry. The government has imposed a 3% tax on imports in order to limit foreign exchange outflows and has raised tariffs for certain products, with the stated objective of replacing some imports with local production. It also promises to strengthen industrial exports.

But after years of neglect, there is no magic bullet. Strengthening the industrial sector will take time and requires a paradigm shift. The Lebanese state must rise to its responsibilities first of all, and starting with the most urgent issues, divide the cost of the current crisis equitably among the various sections of the population, and prevent a devaluation of the currency [LP8] that would certainly reduce imports, but at the risk of [LP9] destroying what remains of the social and productive fabric of the country.

The Enigma of Alain Bifani