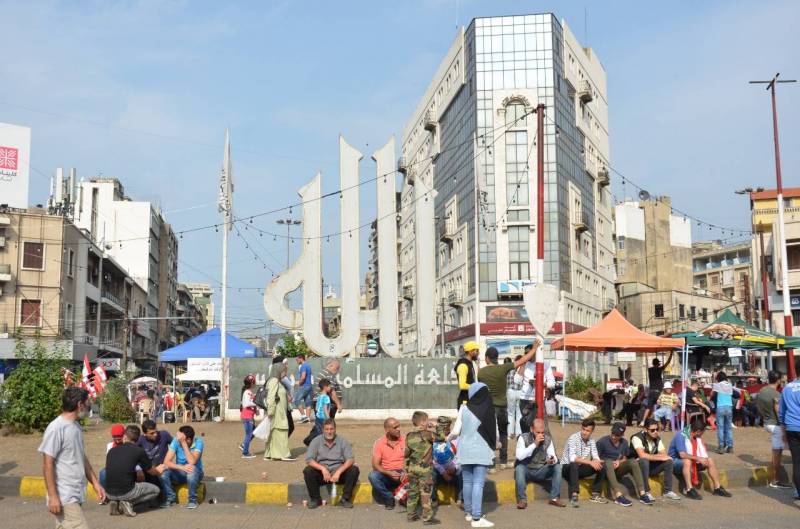 Who would have thought that a tax on online calls via applications such as WhatsApp or Skype could have brought down the government?

Needless to say, the causes of the October 17 uprising cannot be reduced to the tax that was scrapped by the evening of the day it was proposed. However, the reaction on the street has shown that the Lebanese population is fed up with the public policies pursued so far, a fact which further reduces the already narrow room for manoeuvre that the next government will have as it seeks to manage the crisis, which may worsen in the coming weeks. In truth, the crisis had begun to emerge before October 17, and on several fronts.

First, on the economic and social front, there has been a stagnation, or even a slight contraction, in the forecasted GDP this year due to tighter credit conditions, and a slowdown in the real estate sector. These conditions are themselves the consequences of the steps taken to manage the liquidity crisis by the Central Bank. In fact, with the drying up of foreign currency inflows, monetary authorities have in recent months stepped up measures that aim to simultaneously attract new deposits into the banking sector and limit the demand for dollars.

The Central Bank started by using unconventional methods, which have become the norm in recent years, with financial engineering enabling banks to offer very high returns on deposits to attract capital from abroad. According to the latest report by the International Monetary Fund, published in October, the average yield on new deposits in Lebanese Pounds and dollars was 17% over ten years. As of last July, deposits over three years offered even higher returns, the IMF said. This has had repercussions on the credit interest rates granted to the private sector, which have contracted and strangled economic activity. Despite this, bank deposits were down, and the Central Bank’s foreign currency reserves, mainly fueled by these very deposits, continued to decline.

One of the most visible signs that liquidity was drying up was a decision taken by the monetary authorities in early October to give priority to finance the import of strategic commodities (gasoline, flour and medicines). On the other hand, other importers have been restricted from converting Lebanese Pound to dollars by their banks, which has forced them to buy from exchange offices at prices above the official rate. These restrictions, even if applied randomly depending on the banks and clients, constitute a kind of exchange control that has never been seen before in the monetary history of Lebanon. But this is the only way that the Central Bank has managed to contain the demand on dollars, and preserve the exchange reserves needed to stabilize the Lebanese Pound.

The stabilization of the Lebanese Pound is a strategic objective because in addition to its huge social impact, a devaluation would also cause an explosion of the dollar-denominated government debt, which accounts for a little under half of the total public debt. According to a study published in October by Capital Economics, a depreciation of the Lebanese Pound against the Dollar of 10% would cause an increase in the service of the ratio of public debt to GDP by 5 percentage points. Even more, if the Central Bank allows the Pound to float, it would lose 50% of its value, according to IMF estimates and would make the debt ratio jump to 175% of the GDP, the current level of 150% is already considered unsustainable. The solvency of the state determines that of the banking sector, 69% of whose assets are now exposed to public debt, directly or through the Central Bank, which is now worth eight times its own funds.

This is the heart of the problem that monetary policy has so far allowed us to ignore while worsening the situation. Since the late 1990s, the system put in place between the State, the banks, and the Central Bank has aimed to attract more and more dollar deposits to finance the State’s debt, while strengthening the foreign exchange reserves of the Central Bank. But this mechanism is failing today. Dollars are scarce in the region as a whole, as a result of lower oil prices. Capital flows are also particularly suspicious of Lebanon amid doubts surrounding the country's ability to repay its debts.

Faced with this existential shift, the ruling class has so far believed that it is sufficient to impose new taxes on the population to regain confidence and boost capital inflows, pending so-far hypothetical gas discoveries. But if the engineering of the Central Bank has allowed a state unable to make reforms to buy itself time, this approach has clearly run out of steam, all the while exhausting the economy and its citizens. In the current economic and social situation, austerity is not only very difficult to impose, it will also be counterproductive.

For many observers, debt restructuring now seems inevitable. The question is whether Lebanon will have a government that can anticipate it, and manage it in a responsible and equitable manner in order to reduce its burden on the most vulnerable.