With the drying up of foreign currencies and the current confidence crisis, currency exchange offices remain crowded as the Lebanese Pound depreciates. 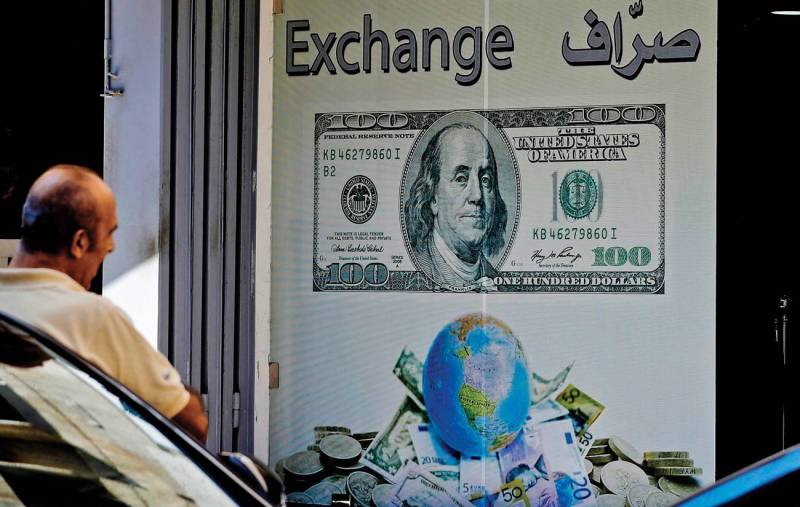 It is 8:30 in the morning and a queue has already started to form in front of a currency exchange office in the Metn area. Customers are becoming impatient as the money changer takes his time before opening for business. "We want to get a sense of the supply and demand on dollars before we set the rate at which we will buy and sell," he said.

In the queue, a man holding 200 dollars wanted to know how much they were going to bring him in Lebanese Pounds. "I was told that the dollar was trading at over 1,800 Lebanese Pounds yesterday [the interview took place at the beginning of November, ed]. I hope to sell it at a better rate today," he said. The lady behind him looked more worried. "I have to transfer 1,500 dollars to my son who is studying abroad. I used to do it through my bank, at the official rate, but now I have to exchange Lebanese pound to dollars at the exchange office, so I can send them. I have to see how much it will cost me,” she sighed.

"In regular times, our clientele was mainly made up of tourists, foreign workers and a few companies," explained the vice-president of the Syndicate of currency exchange dealers, Elie Srour. "But since the banks restricted access to dollars, everyone who needs it is coming to us," he added.

Faced with a drying up of their foreign currency liquidity, the banks imposed, since the end of August, drastic restrictions on foreign exchange transactions, both for individuals and businesses. Only a handful of businesses have obtained the right to convert Lebanese Pounds at the official rate, namely importers of wheat, fuel and medicines, following a circular issued by the Central Bank. Every other business has had to resort to money changers to obtain foreign currency. Even holders of dollar bank accounts now have very limited access to their cash, and must bring in "fresh dollars" in the hope of making a transfer abroad, whether to finance a family member or to pay suppliers.

The law of the market

Currency exchange offices, which before the crisis only accounted for 2% of exchange operations according to the Central Bank’s figures, have now become the country’s main providers of dollars.

Beyond the opportunity this situation offers to some currency changers, some of whom have multiplied by twenty their profit margins, this parallel market is allowing the depreciation of the Lebanese Pound. The national currency has lost more than 30% of its value on the parallel market since September, even reaching a peak of 2,350 Lebanese Pounds to the dollar on November 28, a devaluation of about 50% from its official rate.

"The demand for dollars is very high, much higher than the supply," says a money changer, adding that he’s having to close several times a day after running out of dollars. "We do not have access to currencies from the banks or the Central Bank," he explained. “The only dollars we have are the ones people are willing to give us."

Just like him, the overwhelming majority of the approximately 300 exchange offices regulated by the Central Bank have no other means of obtaining dollars. Only about ten agents, holders of a category A license, have the right to export the various currencies collected from tourists to their country of origin, and in return bring back dollars, which will then be partially distributed to category B exchange offices. Mecattaf is one of the only companies that is also licensed to repatriate cash dollars deposited in foreign branches of local banks, in exchange for a commission ranging between 2 and 4 per thousand.

The money changers’ dollar supply is therefore determined by the amount of cash dollars circulating in the country. Banks have been trying to limit withdrawals for the past few weeks, but the crisis of confidence in the financial system is constantly increasing the amount of money in circulation. In early November, the governor of the Central Bank estimated that citizens were keeping about three billion dollars in their homes. It remains to be seen at what price people are willing to give this money up. There’s also the money expatriates bring home with them, money which they could be tempted to exchange at a more advantageous rate than the official one.

However, this phenomenon also increases the risk of money laundering. The market is, in principle, regulated by the Banking Control Commission of Lebanon (BCCL), which requires traders to keep a register of the clients’ identity papers and of transaction documents for all foreign exchange operations exceeding 10,000 dollars. Moreover, at the end of November, the BCCL had to reinforce the surveillance conditions in order to better regulate exchange activities. However, this only applies to holders of an official license. "There are more than 600 exchange offices in Lebanon, of which only 300 are legal," says Michel Mecattaf, director general of the Mecattaf exchange office. "These exchange offices work on the black market without the slightest control," he said.