The decline in GDP share of agriculture, combined with falling imports, raises the question of possible shortages. However, experts dismiss the risk of an acute food crisis in the short term. 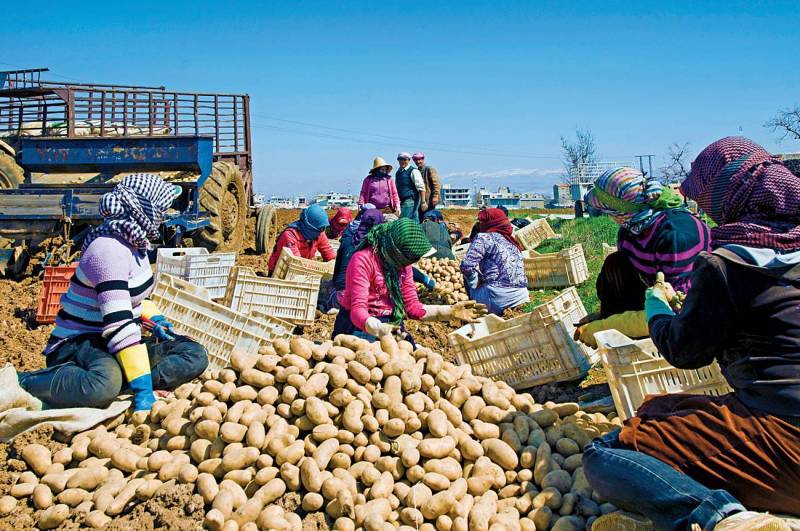 In its latest report, the Centre de Recherche et d'Etudes Agricole Libanais (Creal) goes straight to the point: Lebanon’s agricultural production will collapse in 2020, if nothing is done to help farmers pass this terrible year. According to projections by the private agency, which collects data on the agricultural sector, the drop in the production is expected to be around 40% of agriculture’s total share in the GDP, and this share won’t exceed $1.2 billion this year.

In some crops, declines could be up to 70% (in value) and more than 50% (in volume) compared to 2018 crops. This is particularly the case with regard to some common foods in the Lebanese cuisine, such as potatoes and onions, which are among the most affected crops.

The reason for this brutal and violent interruption is known. It is the banking and financial crisis that is endangering this year’s agricultural seasons and, more certainly, those of 2021.

To understand why agriculture may be more affected than other sectors, one must know that since the end of the 1975-1990 war, its main actors – local wholesalers and resellers, farmers… – have been living on credit. Even their current cash flow is financed by credits from input import companies, which see it as a means of guaranteeing the sale of their seeds, fertilizers and other phytosanitary products.

“Nothing has been done for the development of the food production sector. Trade has almost always been promoted through, inter alia, the signing of free trade agreements. This has been at the expense of local agricultural products, whose costs make them less competitive vis-à-vis foreign products; which are, in addition, all subsidized,” said Moussa Freiji, founder of the Tanmia group and president of the association of poultry farmers.

For an already dying sector, the final blow was struck when banks imposed a freeze on credit lines. “Those who didn’t have a sound management of their finances will find it difficult to survive,” said Riad Saadé, director of Creal. “There will be business closures, including some of the biggest names in the sector.”

The debts aren’t huge relative to the scale of the Lebanese economy: according to Creal, it’s about USD 140 million in arrears. But the fact that the debts haven’t been paid prohibits the import of new seeds, fertilizers and other quality phytosanitary products.

“There is an urgent need to decide a moratorium on agricultural debt to allow the sector to recover. Otherwise, the catastrophe will take place in 2021,” said Riad Saadé. “Then, we’ll really no longer have any means to recover.”

Is a Food Crisis Looming?

Without reliable statistical tools, it’s difficult to measure precisely the impact of local production drop on the country’s food supply. “In general, Lebanon imports 80% of its needs, whether agricultural or agro-industrial products,” said Maurice Saadé, representative of the UN Food and Agriculture Organization (FAO) in Lebanon. The problem is that agricultural imports are also in a free-fall. They dropped to about 32% in December 2019 – the most recent available figure – compared to the same period in 2018, according to customs authority.

Correlated with the fall of GDP share of agriculture, this trend raises the question of possible shortages. Some products may without doubt disappear from the market, but the scenario of an acute crisis is ruled out in the immediate future. “Nobody will die of hunger in Lebanon,” said Maurice Saadé.

To begin with, if agriculture is in very bad shape, agro-industry is doing better. A majority of these businesses still have access to foreign currencies to pay their foreign suppliers. This is particularly the case with the poultry sector, which is still able to import the feed needed for the farms by securing foreign currency from moneychangers. But “that means a rise in our costs of about 20%, which has been reflected on our selling prices,” said Moussa Freiji.

This situation will affect the most vulnerable, knowing that over the period 2016-2018, 11% of the Lebanese were already undernourished, according to the American University of Beirut (AUB). However, the inflationary impact may be mitigated by agricultural imports from Syria, which, most of the time, enter the country illegally. The devaluation of the Syrian pound makes these imports even more competitive in light of the Lebanese economic crisis.

“Apart from the fact that agricultural prices very rarely follow inflation in the same proportions, these prices are continually subject to competition from Syrian products smuggled in their vast majority and sold to Lebanese wholesale markets,” said Riad Saadé. This should ultimately limit consumer price inflation, or even offer a possible way out for some agro-industrial businesses, which may look for some of their raw materials in Syria.

More than the food shortage risk in the short term, the danger may be social and may affect some 250,000 to 300,000 households living in whole or in part on agriculture. “Agriculture and agro-industry account for 25% of private jobs,” said Maurice Saadé.

But these farmers might prefer to leave their land uncultivated and get rid of their livestock rather than selling at cost price or at a loss. “This is already the case with small farmers,” said Saïd Gédéon, director of the Agriculture Department at the Zahle and Bekaa Chamber of Commerce and Industry. “If nothing is done, the phenomenon will exacerbate. These families are likely to increase the number of people in precarious situation,” he added. Despite this worrying situation, the authorities have done nothing so far. “The ministry has no solution,” said Moussa Freiji. “The minister is totally unaware of the problems of the agricultural sector.”

The government has established a Food Security Committee supervised by the new combined ministry of agriculture and culture, but it has yet never met. The ministry even saw its budget cut by 11.4% this year to USD 50 million. The decline in funding is mainly bearing on the too few subsidies that the ministry has so far granted to small farmers.

“Yet, the crisis may be an opportunity,” said Moussa Freiji.

“Within three or four years, this may create a different dynamic,” said Maurice Saadé.

The devaluation of the Lebanese pound will, of course, make “made in Lebanon” products more competitive, and cessation of activities by small-scale farmers will contribute to the consolidation of the sector.

“The number of farms may decrease, but those which would survive should become more efficient,” said Maurice Saadé.

That is a wishful thinking, which the expert uses as a “message of hope” to encourage the agriculture sector players to hold on, despite everything.