In its rescue plan, the government expects exports to grow, driven by the national currency’s devaluation. But for now, the increase in exports is very relative. 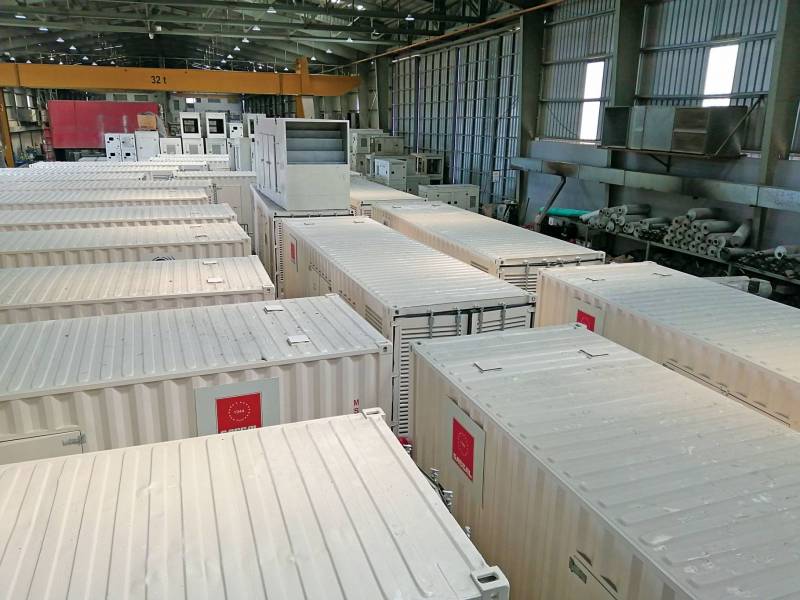 For Saccal, the giant generator builder that exports about 80% of its production, its “margin for maneuver is very limited.”

In 1987, when the Lebanese pound lost more than 420% of its value against the US dollar in one year, the balance of payments posted its first surplus in five years. It amounted to “about $1 billion, mainly due to a sharp recovery in the balance of trade,” according to the January 11, 1988 edition of Le Commerce du Levant.

The industrial sector briefly benefited, before being dragged one more time into the war – the so-called War of Liberation that marked the last stage of Lebanon’s civil strife – and then set aside when postwar reconstruction policies were formulated.

The rescue plan adopted in early May by the government stresses that the overvaluation of the local currency has had “a crowding-out effect on the development of the industrial sector.” It relies on the pound’s devaluation, this time, to get another try. All the more so because an im-provement in the relative competitiveness of Lebanese products would be combined with the gradual reopening of the borders with Syria, and thus land routes to Iraq and Gulf states, among Lebanon’s other leading markets, and the fall in oil prices. The latter factor is, however, double-edged, as it also depresses regional demand.

Exports fell by 2.6% in six months, excluding “pearls and precious stones and metals”

For the time being, at least, the continued depreciation of the Lebanese pound, which should be formalized in devaluation if Lebanon engages in a program with the International Monetary Fund (IMF), is not the boon that the exporters expected, although they have access to “fresh money.”

According to customs figures, between September 2019, when the pound began to depreciate on the parallel market, and February, imports fell by 16.9% in value to $9 billion, and exports increased by 33.9% to $2.3 billion, compared to the same period a year earlier. However, the increase in exports was driven by pearls and precious stones and metals, a category of products including jewelry, but also, for the most part, unworked or semi-worked gold, with no real add-ed value. Excluding this category, exports declined by 2.6% in value and 10.2% in volume.

Will the gradual recovery of global demand allow Lebanese industrialists to conquer foreign markets, with products that have become cheaper to produce?

Not so sure. “Most of our certified and organic raw materials are imported, and we continue to pay our employees in dollars for the time being, so depreciation does not benefit us,” said Has-san Rifai, marketing director of cosmetics manufacturer Beesline, which makes 95% of its sales from exports, especially to Gulf states.

The same is true for jeweler Selim Mouzannar: “Imported metals and stones account for 65% of our costs, while the rest is mainly labor costs with workers trained for several years in our workshops and whose salaries I have to readjust at least in part to retain them.”

Saccal, the generator giant that exports about 80% of its production, has managed to slightly lower its prices. “But our margin for maneuver is very limited,” said Asaad Saccal, the group’s managing director, 70% of whose costs are in dollars.

“Machines, including generators, and chemicals are two complex industrial products with high export potential for Lebanon. But their production requires a significant share of imported raw materials and technology,” said Nancy Ezzeddine, co-author of a report on the promotion of high value-added exports published in August 2019 by the Lebanese Center for Policy Study (LCPS).

For several months now, industrialists have been seeking the easing of banking restrictions pre-venting them from accessing their funds in foreign currencies blocked in banks. In March, the government and the Bank of Lebanon (BOL) announced the creation of a fund called “Cedar Oxygen,” based in Europe, to finance imports of raw materials by Lebanese industrialists. The fund is expected to be financed by loans from international institutions estimated at $600 mil-lion to $700 million over one year. “The platform should be launched soon,” said Fadi Gemayel, president of the Association of Lebanese Industrialists (ALI).

In the meantime, manufacturers will have to settle for a $100 million emergency fund, granted through BOL’s intermediate circular no. 556 and divided into increments of up to $300,000 per company. It plans to release the dollars that these manufacturers hold in the banks, up to 90% of the requested sum, on the condition that they provide the remaining 10% in “fresh money”. According to Gemayel, “this should help manufacturers maintain production and export abroad for a short period of time.”

Producers whose supply is less dependent on foreign countries are probably more advantaged. “We are renegotiating contracts with grape growers, traditionally in dollars, so that we can pay them in Lebanese pounds,” said Zafer Chaoui, president of the Union Vinicole du Liban (Leba-non's association of wine producers) and Château Ksara. The purchase of grapes accounted for about 10% of Château Ksara’s turnover in 2018. “We also hope to save on labor costs, which before the crisis accounted for about 20% of our revenues, even if a medium-term wage in-crease seems inevitable,” the wine producer said.

Will he hence be able to reduce the prices of the bottles abroad to gain market share? “It is too early to tell,” Chaoui said cautiously. “First we have to deal with a substantial reduction in sales in the local market, and then recover export shares lost because of coronavirus.”

But even if price competitiveness improves and international demand is there, will Lebanese companies be able to produce more? Some factories that are not operating at full capacity to-day may do this. “We are capable of increasing production quickly,” said Fadi Abboud, CEO of plastic packaging specialist General Packaging Industries (GPI). He hopes to take advantage of the renewed demand for this type of product in Europe in the medium term in the wake of the Covid-19 pandemic.

But others, “will need to be able to set up new production capacity and hire staff to cope with a possible increase in foreign demand,” said Hassan Ayoub, head of the economics department at the Lebanese University’s Faculty of Economics and Management.

However, the weakness of certain structural factors of competitiveness is not likely to encour-age investment, in an uncertain economic context, both at the global and local levels.

Lebanon has a poor score of 54.3 out of 100 on the World Bank’s Ease of doing business index, ranking it 143rd out of 190 countries, according to data collected before May 2019. “The depre-ciation of the Lebanese pound is not a game changer,” said Mazen Soueid, president of the Lebanese Investment Development Authority of Lebanon (IDAL). “Exports are more affected by the costs of electricity, land and bureaucracy.”

Pending long-term structural reforms promised by the government, the rescue plan includes some short-term support measures. Among the anticipated measures is the introduction of in-dustrial export subsidies, provided for in the 2020 budget; a simplification and relaxation of administrative procedures for export and import; and the creation of a “Proudly Made in Leba-non” label, to promote the brand image of Lebanese production. Not really game changers ei-ther.